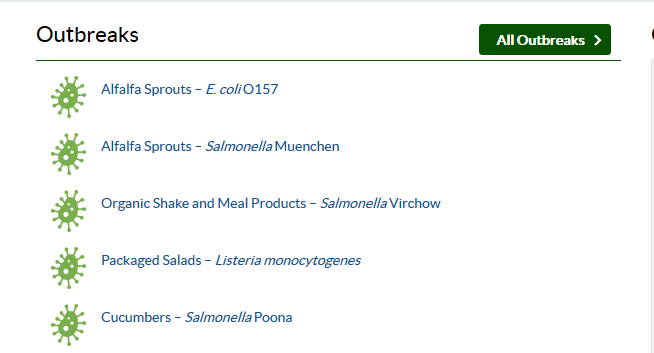 Ironically, all of the CDC’s outbreak warnings on its homepage are currently for items on the so-called “healthy” foods list.

Nine people in either Minnesota or Wisconsin who ate alfalfa sprouts have been diagnosed with the outbreak strain of Shiga toxin-producing Escherichia coli O157 (STEC O157), which can cause hemolytic uremic syndrome, a potentially-fatal type of kidney failure. The CDC has linked the infections to sprouts produced by Jack & the Green Spouts.

“This outbreak does not appear to be related to the ongoing multistate outbreak of Salmonella Muenchen infections linked to alfalfa sprouts produced by Sweetwater Farms of Inman, Kansas,” the CDC reports.

Thus far, 13 people infected with the outbreak strain of Salmonella Muenchen have been reported from four states have been linked to Sweetwater Farms sprouts.

Fans of organic shakes and meals are being warned to avoid those products sold by RAW Organic Shakes & Meal products made by Garden of Life, LLC (CDC’s “likely” suspect). Eighteen cases of Salmonella Virchow from 15 states have been reported as of Feb. 17, 2016. The suspected products, sold nationally, have been voluntarily recalled.

Packaged salads have apparently caused eighteen people from nine states to contract Listeria, which “can cause a serious, life-threatening illness,” the CDC warns. All 18 cases were hospitalized, and one of those died.

“Laboratory tests performed on clinical isolates from all 18 ill people showed that the isolates are highly related genetically,” the CDC reports:

“Epidemiologic and laboratory evidence indicate that packaged salads produced at the Dole processing facility in Springfield, Ohio and sold under various brand names are the likely source of this outbreak.”

The products have been recalled, and the CDC warns not to eat any still on-hand.

Finally, a 16-state outbreak of Salmonella Poona infections linked to imported cucumbers has caused illness in 50 victims and caused two deaths since the CDC’s last update on November 19, 2015.

The CDC reports that 888 people have been infected since the outbreak was first declared:

“Two recalls of cucumbers that may be contaminated with Salmonella were announced in September 2015 as a result of this investigation: Andrew & Williamson Fresh Produce and Custom Produce Sales.

“888 people infected with the outbreak strains of Salmonella Poona have been reported from 39 states, an increase of 50 cases since the last update on November 19, 2015.

“191 ill people have been hospitalized, and six deaths have been reported from Arizona (1), California (3), Oklahoma (1), and Texas (1). Salmonella infection was not considered to be a contributing factor in two of the three deaths in California.”