I'm done with this garbage. All of these "activists," race hustlers and just plain morons on Twitter can't go one day without everything being about themselves and their "plight." September 11th is a day where - hopefully - most Americans remember those that lost their lives as a result of the radical Islamic terrorism that changed society forever. It might be because most of these Twitter idiots aren't old enough to understand the gravity of what happened that day. It's just sad, and their ignorance is enough to make you spit nickels.

On a day of mourning and remembrance, a new hashtag appeared in the trending section - #AllBuildingsMatter. Now at first glance, you might not think much of it. But with further examination of the meaning that some on Twitter have applied to said hashtag, you'll see that it's supposed to draw a parallel between #AllBuildingsMatter and those who use the phrase "All Lives Matter."

Essentially, those using the hashtag for their race hustling, "activist" purposes want to downplay people's sorrow over what happened 19 years ago by intimating that it's no different than when people are outraged over such things as slavery or when a black person dies at the hands of police.

Yes, slavery was a horrific time in this country's history that should have it's remembrance. But can we remember anything else that happened in this country that has nothing to do with race? Everything has to be about racism? That sounds pretty racist to me.

People of every color, gender and sexual orientation died on 9/11. So for others to downplay the tragic events of that day for their own purposes is sick and those people should seek help immediately. I'm not sorry for saying that, either. No matter who you are, it's not always about you.

Here are some examples of tweets from people who used #AllBuildingsMatter in their tweets to prove some kind of selfish point. (Note: Some tweets used copyrighted images, so only their words will be shown here.): 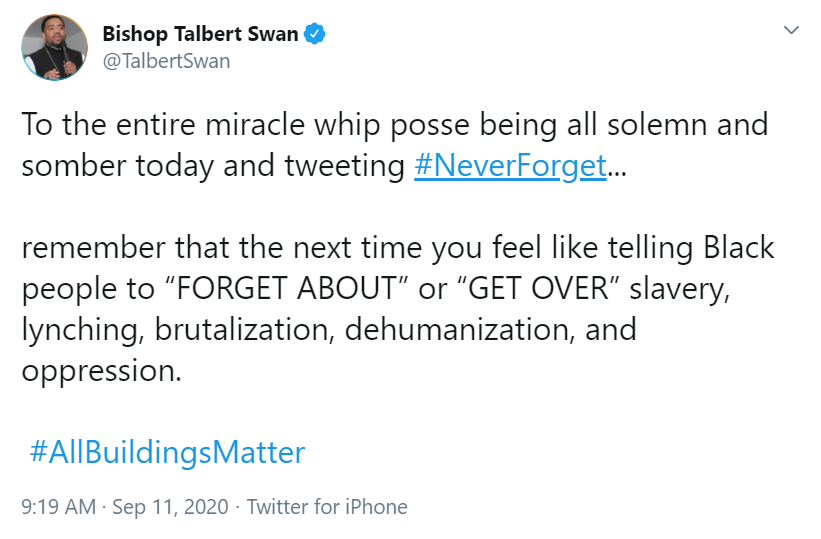