The pop media have a knack for helping push the revolving door of bureaucrats, Deep State plotters, think-tankers, university hacks, and ne’er-do-wells who circle in and out of those favored slots as they push various government-promoting agendas and philosophies.

Despite his Obama-era involvement in hundreds, if not thousands, of utterly unconstitutional, non-wartime, extrajudicial drone killings, and despite his evident ties to two manufactured “Russian Meddling for Trump” narratives in 2017 and 2020 (or, perhaps, because of them) MSNBC hired former CIA Director John Brennan to be an analyst, and keeps bringing him on their incredible (in more ways than one) shrinking platform.

Likewise, CNN hired James Clapper, the Obama “National Security” man who openly stated a falsehood to Congress in 2014 when asked by Sen, Ron Wyden if the U.S. government was spying on the telecommunications of Americans (hint: it was). Of course, like the U.S. government, CNN gave the man a pass - and gave Clapper a salary to speak as an advisor, to boot.

Related: ‘This Story Is Not Over!’; Kooky Malcolm Nance Goes Full-Blown X-Files on Collusion | MRCTV

And now, the latest in the continuing march of misanthropes: MSNBC is mum about yet another of their fave “national security experts” – a man who makes one wonder if he comes from the Deep State, or the "Derp" State.

His name is Malcolm Nance, he’s been directly or indirectly involved with “intelligence” and the military since he started in the Navy in 1981, and he’s attracted more than a bit of troubling attention for contradictions and statements such as calling waterboarding “torture” in 2007 after admitting he had done it hundreds of times, openly claiming on-air that Donald Trump had been “compromised” by Russia since 1977, and falsely telling the unquestioning Joy Reid on MSNBC that Green Party Presidential candidate Dr. Jill Stein had a program on Russian-sponsored news net Russia Today (surely Dr. Stein was surprised to hear of her non-existent hit show).

Nance decided to parade his great knowledge February 24 by tweeting that the Chernobyl nuclear plant provides energy – nearly 40 years after the reactor meltdown there kinda, sorta, STOPPED energy creation at the site, visited immediate and long-term death and ionized radiation disease to between 9,000 and 60,000 people, and created an unlivable “exclusion zone” 30 km in diameter that will remain deadly or dangerous to biological life for decades. 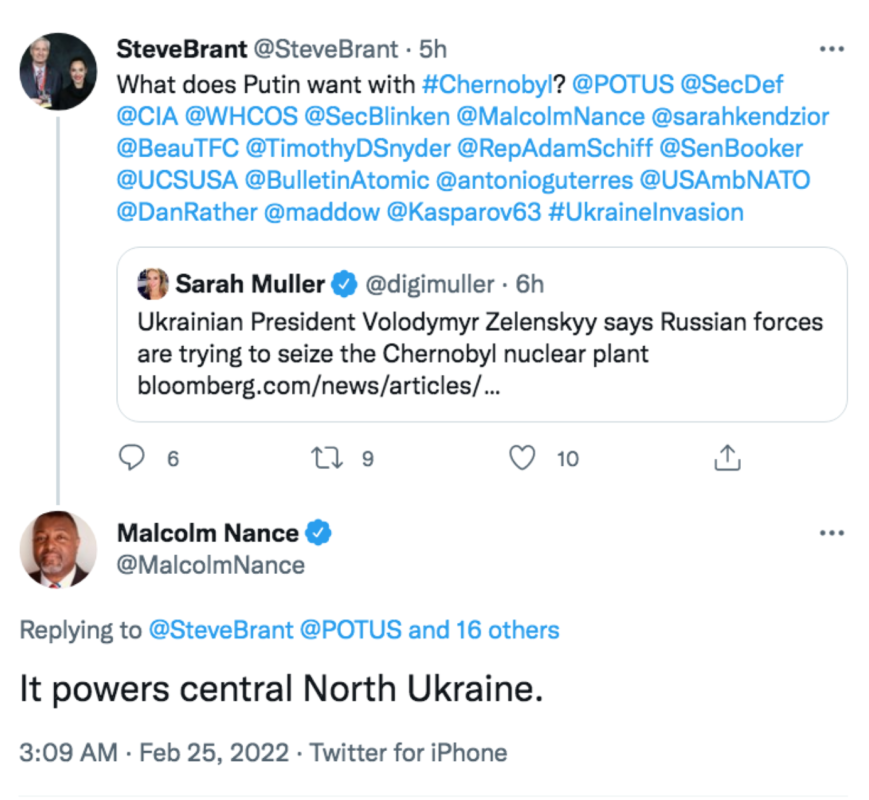 This is the place that, in 1986, at the time of the meltdown, saw a release of radioactive material 400 times higher than the nuclear blast at Hiroshima and radiation levels near the core complex as high as 300 Sieverts per hour, which causes quick death in that single hour, and sees long-term death for anyone exposed for even a fraction of an hour.

Nance, the supposed “national security expert,” not only neglected to recall the worst nuclear disaster in world history (followed by the 2011 Tsunami-flooded reactor collapse at Fukushima, Japan), and all those who perished or suffered because of it, he took the time to type his dumb thoughts, then post them, after someone asked why Vladmir Putin would send troops to secure the Chernobyl site in the midst of his attack on Ukraine.

Other observers figured that Putin did so as a way to create a staging area that Ukrainian forces would not bomb, because bombing the land would release clouds of radioactive dust that would be carried into settled parts of Ukraine.

Of course, like Nance deleted the history of Chernobyl in his tweet, he also deleted the tweet itself, trying to cover up his legacy of completely asinine statements.

Good thing Mr. Nance is such an expert rather than a fiction author, and that networks like MSNBC welcome him so often.

One can’t wait to see what he offers next.

.@pdoocy challenged Psaki on the Biden admin's Russian sanctions: "Do you think the people of Ukraine have a month?" pic.twitter.com/EeCSRvOoZz