In the name of transgender sensitivity, we should never ever say “pregnant women” anymore, because it’s just not inclusive enough… That is, unless you agree with The Equality Institute (EQI), and I really hope you don't.

EQI is an Australian-based feminist group (that has lost their sense of reality) and they are making it very “clear” (despite what science says) that anyone can "fall" pregnant - not just women. 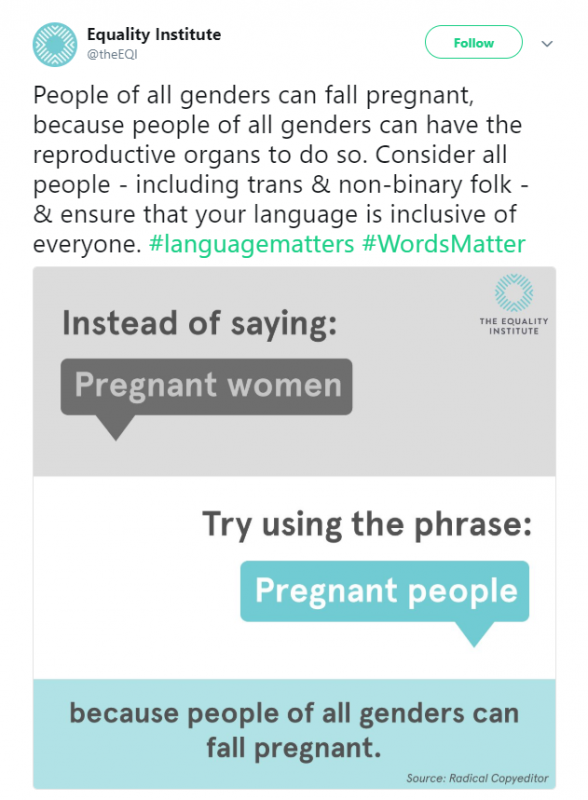 Have people really gotten to the point where they have lost the ability to know truth, even in its simplest forms?

The group boasts itself as a “global research and creative agency working to advance gender equality and prevent violence against women and girls.” With the tweet they sent out, it makes you think they should probably stick to this agenda. But then again, if they are that off in determining who can become pregnant and who can’t, then maybe they shouldn’t.

Thankfully there were people who fought back on this “feminist” group’s ideology:

Yes! Those tweets help prove not everyone has lost their mind and given over to this postmodern mindset. But, there are plenty of people out there who have given over to it, as EQI makes apparent.

More and more we see groups attempting to be more “inclusive”, but looking beyond the surface we find this “inclusiveness” is instead “foolishness”. In the process of being more “accepting” of all kinds of people, organizations like this are doing their best to destroy what is true and factual, and that just can’t be ignored.