High School Removes Swastikas From 'The Producers' Over Offensiveness 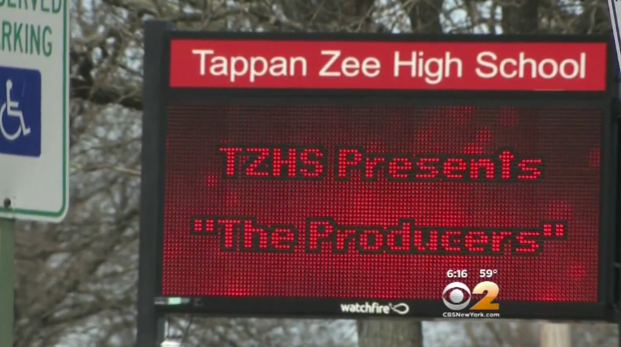 Without a single shred of self-awareness about the irony of the situation, a New York high school removed all swastikas from the school’s performance of the satirical musical “The Producers” after a “handful of parents” complained about the allegedly offensive imagery.

CBS2 reports that after consulting with rabbis and the Rockland Holocaust Study Center, South Orangetown Superintendent Bob Pritchard decided to pull the swastikas from the play at Tappan Zee High School in Orangetown, New York.

In a statement to CBS2, Pritchard said, “There is no context in a public high school where a swastika is appropriate.”

Apparently, a swastika is not even appropriate in the context of high school students learning about World War II, or in a play whose entire original premise was to create a play so controversial it would flop.

CBS2 reports a “handful of parents” complained about the swastikas being offensive on social media, leading to the superintendent’s decision to remove them.

Some, however, disagree with the superintendent’s decision. Play participants are reportedly decrying the school for censorship.

Tyler Lowe, a student at the school, said the play is “satire” and that it’s “not supposed to be taken seriously.”

He also said as a “young Jew,” he is not offended by the swastikas in the performance.

Lenora Mesibov, a resident of Orangetown, said she believes Mel Brooks would be “honored that the controversy is going on,” but she thinks he would be “disappointed by the censorship.”

The school’s performance of “The Producers” ran from March 11-12.