That “tolerance” well that the Left constantly talks about has pretty much run dry in the last few years or so. There is no greater evidence of this than radical indoctrinators — umm, professors — on college campuses across the U.S.

Associate Professor and Chair of Howard University’s Department of Afro-American Studies Greg Carr took to Twitter on Wednesday to convey that there’s “no debate” about whether President Donald Trump is a racist. In fact, Carr believes that if you think otherwise, you “can’t be taken seriously on this topic.” 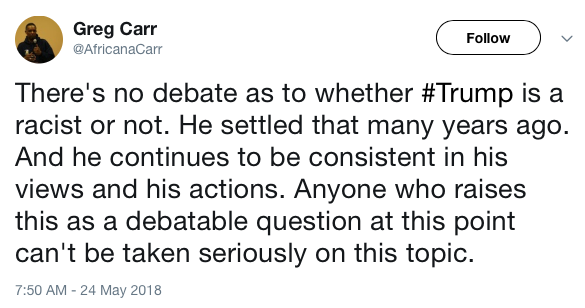 Wow! The stupid is strong with Carr.

In January, White House Press Secretary Sarah Huckabee Sanders posed a good question for critics of Trump's that consider the president a racist.

"Frankly, if the critics of the president were who he said he was, why did NBC give him a show for a decade on TV?" Sanders asked.

People like Carr call Trump racist, because it’s convenient and it falsely strengthens their animus-filled arguments against the president. Notice how Carr gave no examples of Trump’s racism or even gave a reason for this particular tweet. I mean, it’s not like this is the first time someone called Trump racist. The Left uses the “racism” argument so often that it has diminished actual racism.

Even when someone replied to Carr on Twitter, asking him for examples of how Trump is racist, Carr avoided answering like the plague: 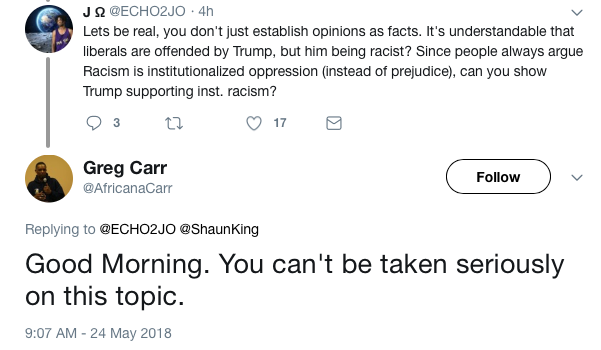 As I’ve said before for racism, the same sentiment applies to the tolerance of the Left. The most intolerant people are the ones that always claim they’re the most tolerant. Carr — and people like him — have no problem being tolerant until they get triggered by anyone that doesn’t read from the gospel of the “Communist Manifesto.”

All Carr’s tweet proves is that a racist can call someone else a racist. That’s all the perceived power the self-important Carr has left — and in claiming racism when it isn’t there — shows that it doesn’t even carry the weight that it used to.

Sad, really. Calling someone racist without any providing any proof muddies the waters between perceived and actual racism.

In the end, Mr. Carr “can’t be taken seriously on this topic.”