The Washington Post ran a hit piece Tuesday morning exposing the identity of the woman behind a popular Twitter account that re-publishes videos of radical leftists doing insane things.

Which, apparently for WaPo and their “technology reporter,” Taylor Lorenz, was a bridge too far.

Lorenz penned an article doxxing the "LibsOfTikTok" account owner (despite the left’s supposed stance against online harassment and targeting - unless, of course, its against a conservative), even going so far as to show up to the private homes of the woman’s relatives to interrogate them for her piece. The article that the outlet then posted originally linked to the creator's real estate license, which includes her license number, her business' address, and her employer's name and license number, making her the target of more than just online harassment and possibly putting her in physical danger. The link has since been removed.

Over the past two years, “LibsOfTikTok” has garnered more than 660,000 followers on Twitter (and rapidly growing), with hundreds of thousands more on Facebook and Instagram, largely by reposting videos from rabid liberals including endless pronoun-pushers, militant and bizarre LGBTQ activists, COVID crazies demanding the eternal masking of children, and “non-binary” public school teachers vowing to indoctrinate other people’s children with LGBTQ propaganda, among others. Most recently, the account has focused on faculty and administrators in taxpayer-funded schools who exploit their positions as "educators" to push highly sexualized subjects including sexual attraction and gender "identity" on children as young as four.

Hardly classified a true “content creator” herself, the woman behind the account almost exclusively re-posts clips self-filmed by leftists who voluntarily uploaded them to social media, all in an effort to expose the far-left agenda that’s not readily being hidden by those pushing it.

But according to the Washington Post, re-posting leftists’ own outrageous video clips is simply another right-wing attempt “designed to generate outrage.”

“The account has emerged as a powerful force on the Internet, shaping right-wing media, impacting anti-LGBTQ+ legislation and influencing millions by posting viral videos aimed at inciting outrage among the right,” Lorenz writes, adding that the account “has become an agenda-setter in right-wing online discourse, and the content it surfaces shows a direct correlation with the recent push in legislation and rhetoric directly targeting the LGBTQ+ community.

Lorenz paints the picture of a real estate agent-turned-anti- LGBTQ pusher of COVID conspiracy theories and election fraud lies – again, without ever explaining how simply reposting leftist-generated content is somehow deceptive. She even reportedly came to the homes of the account creator's relatives as part of her "expose."

Hi @TaylorLorenz! Which of my relatives did you enjoy harassing the most at their homes yesterday? pic.twitter.com/QehkBSgcmG

Hilariously, Lorenz recently did an interview on MSNBC in which she sobbed crocodile tears over her own experience with online harassment, claiming to have “severe PTSD” after being the target of mean tweets.

Ironically, after exposing a private citizen's identity and siccing a left-wing lynch mob on the woman, Lorenz then blocked replies to her story to avoid criticism. 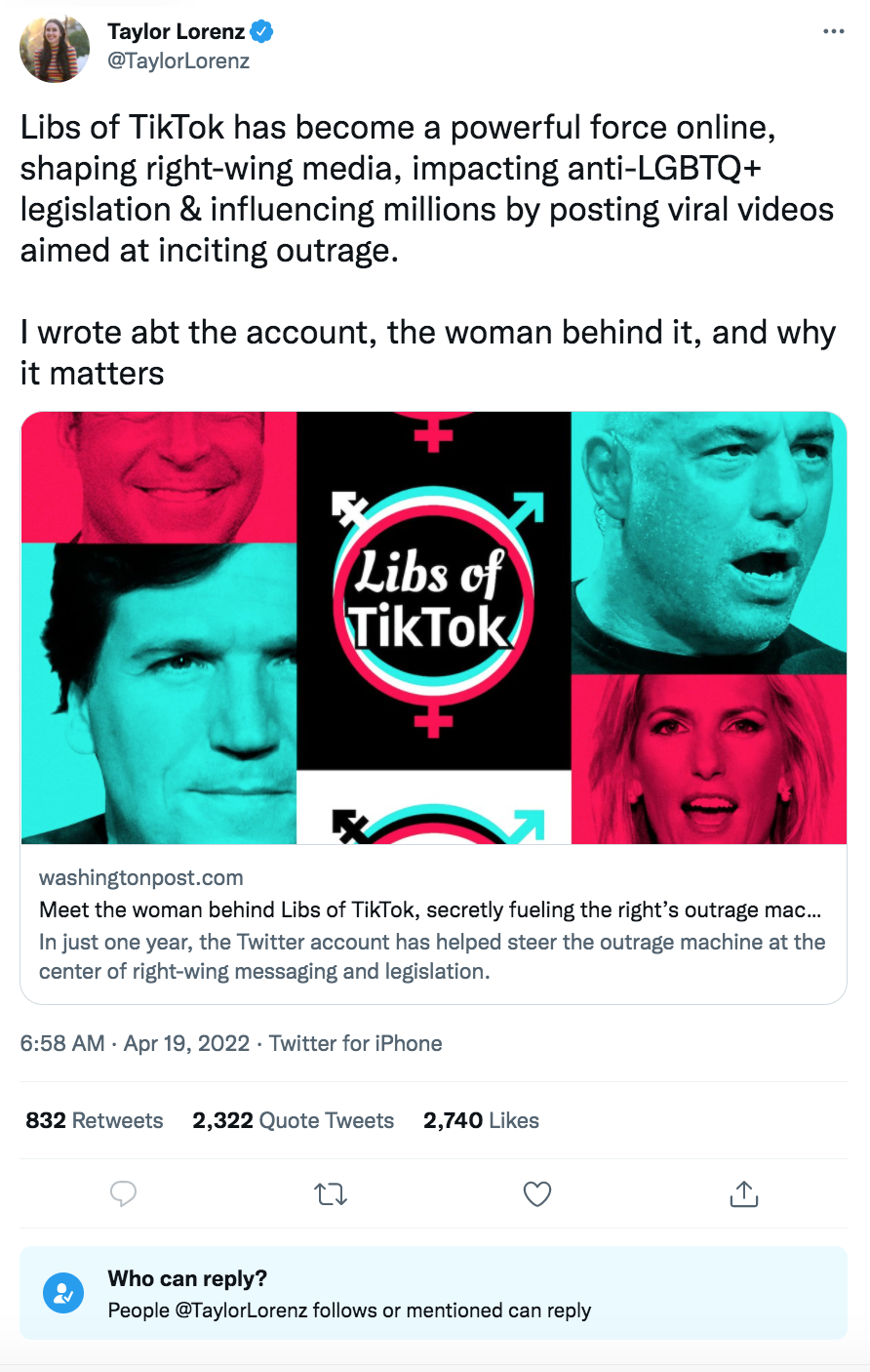