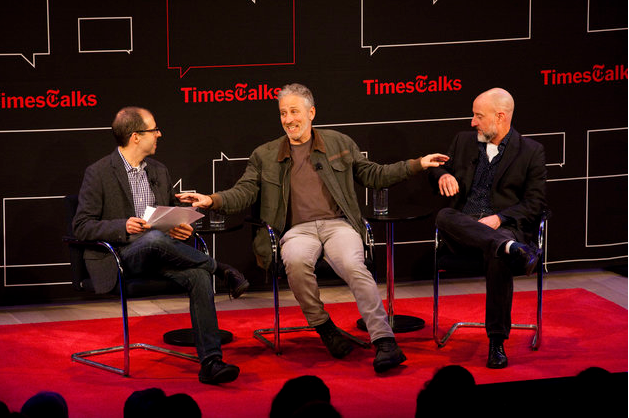 Jon Stewart, former host of The Daily Show, discussed the current state of American media and the 2016 presidential election Wednesday at a “Times Talk” in New York City. The event was put on by The New York Times to promote Chris Smith’s book, The Daily Show: An Oral History as Told by Jon Stewart.

Stewart took the opportunity to comment on the distrust Americans feel toward the media and their failures in the recent election.

“What the media has become is an information-laundering system,” Stewart said, describing the increased blending of “fake news” and the media. Stewart explained the media are too focused on the campaigns themselves and not policies that Americans care about, saying:

“They don’t give a flying f*** about governance, they care about campaigns and that’s where the fun is for them. That’s devastating. And not only is it devastating news-wise, it’s devastating to all of us. Because if a campaign is too long, the fault lines between different tribes in our societies solidify. A campaign is 18 months long and you’ve got to choose a side for 18 months and then a disagreement becomes an argument and an argument becomes a fight and a fight becomes a feud and a feud becomes a war.”

Despite Stewart’s concerns about the media, he doesn’t believe the election outcome would have been any different regardless of the media’s tactics.

“Much of the media is fake,” he said. The idea that if [the media] had done a better job this country would have made another choice is fake.”

“Not everybody that voted for Trump is a racist,” he said. “I don’t give a f*** what any of you say to me. You can yell it at me, you can tweet it at me. They’re not all racists. Or they’re not giving tacit support to a racist system…We all give tacit support to exploitative systems as long as they don’t affect us that badly.”

To illustrate his point, he mentioned NYC first responders he's met during his activist effort to get 9/11 policemen and firefighters sufficient health care.

“A sh**load of them voted for Trump,” he said. “The same people that voted for Trump ran into burning buildings and saved whoever the f*** they could no matter what color they were, no matter what religion and they would do it again tomorrow. So, if you want to sit and tell me that those people are giving tacit approval to an exploitative system – I say, ‘OK, and would you put your life on the line for people who aren’t like you? Because they did.’ I get mad about this stuff.”

Make no mistake, Stewart is no supporter of Donald Trump. He discussed his views on Trump’s hypocrisy, saying Trump portrayed Hillary Clinton as “an unqualified secretary of state because the way she handled classified material."

"His selection for secretary of state will be David Petraeus, who pled guilty to mishandling classified material," Stewart said. "He said she was unqualified because she gave a speech to Goldman Sachs. His secretary of the treasury is somebody from Goldman Sachs. We’re in post-accountability.”

Stewart also discussed Trump’s divisive rhetoric and how we should start looking for and helping “the losers” in our society:

“If [Trump] tries to deport dreamers, then that’s where everyone has to go, to protect them. If he tries to make a Muslim Registry, then everyone has to go there and help them. You have to find the people that are going to be most in jeopardy, I think, and put your attentions on them because now it’s about reality.

But the only thing I would tell everybody to hearten is we’re still the same country. Obama didn’t change and fix everything and Trump can’t ruin everything. If we’re that vulnerable to one guy, that guy – that’s how we’re going out? This incredible experiment in liberty and democracy that we fought and died for is going to go out – with that guy. That can’t be how this story ends.”

To close his remarks at the event discussing the election of Trump, he stated, “F***ing buckle your seatbelt and get ready.”