Merriam-Webster Alters Definition Of Female To Be More Inclusive

Merriam-Webster’s dictionary definition of “female” will certainly make Lia Thomas happy, but no one else.

The world leader in defining the words of the English language subtly changed the definition to cater to the woke-leaning crowd. Most people might not see it at first glance, but now the definition has expanded to include those who might not even be born as a female.

As you can see in the screenshot, item “b” includes a female to include anyone “having a gender identity that is the opposite of male.” 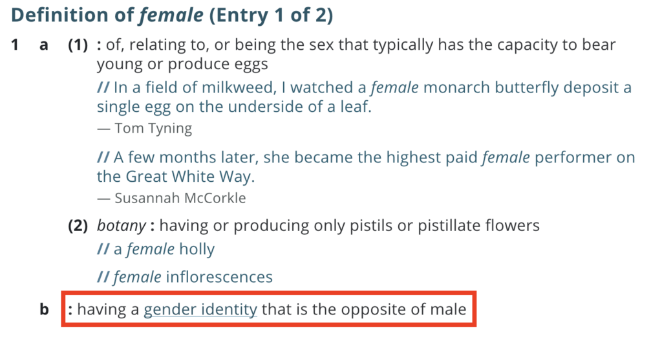 This is quite comical, because as Outkick pointed out, this was not part of the definition of female in 2019, which is just before America’s love affair with everything woke went into high gear. 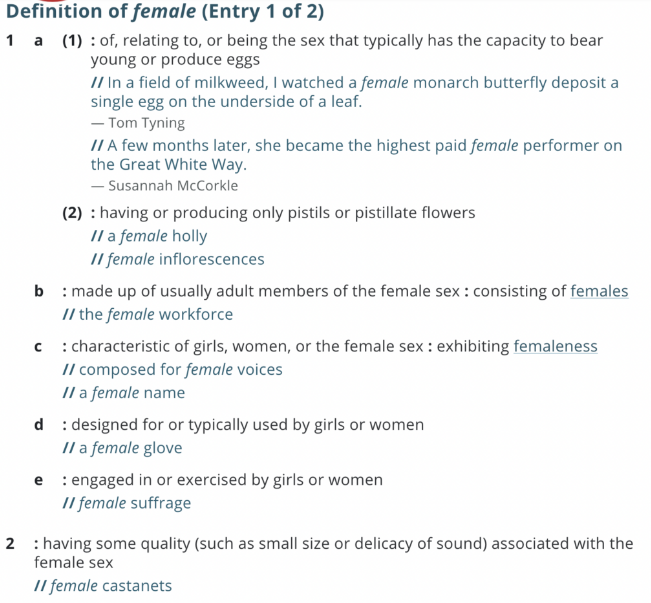 Now obviously, science and common sense haven’t changed in the three years since the last correct iteration of that definition. But society has crumbled so much in the last three years that language has come under assault.

The reason why gaining a foothold on controlling language is because words have meaning, and words and definitions of words shape our thoughts. If one side can fundamentally change what the definition of words are so as to alter our view of reality, then that side can control almost everything else.

In George Orwell’s famous novel 1984, he writes “Power is in tearing human minds to pieces and putting them together again in new shapes of your own choosing.” If this is not a shockingly accurate description of what the left is attempting to do through radically altering language, I don’t know what is.

Yet another example of Big Tech's love for censorship. pic.twitter.com/eaEYcXj3Y0