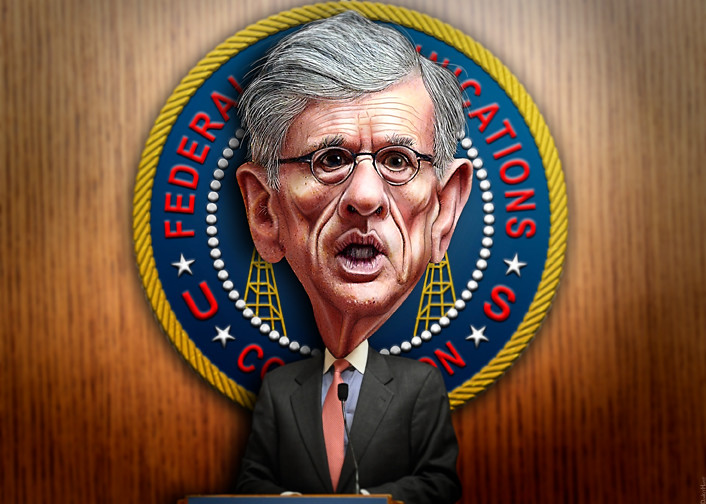 In Medieval times, Kings and Queens interested in maintaining control over small, outlying geographical areas arranged a complex system of fiefdoms, vesting feudal lords with their imprimatur to tell the local serfs and vassals what to do, and granting them the “power” to extract taxes – a portion of which would be given to the royals.

Despite Constitutional strictures created to insure the contrary, the United States federal government has followed pretty much the same template, albeit on a bureaucratic, rather than monarchical, level.

Case in point, the Federal Communications Commission (FCC), which is showing once more that it is a power-hungry, mafia-like gang that piles one onerous mandate upon the next, never bothering to really hear the pleas of the serfs, and never bothering to address the things it screwed up in the first place.

In a September 8, 2016 “Op-Ed” published in the LA Times, FCC Commissar Tom Wheeler told the world that he and his pals on the feudal board are planning to institute a wondrous new mandate that will solve a problem. It did not seem to bother him or the editors of the LA Times that he was announcing a planned mandate in pages reserved for “opinions.” Likewise, Mr. Wheeler never bothered to mention that the problem he was claiming to fix was created by the FCC in the first place, and his fix would lead to even more problems.

Let’s look at the plan, then unravel the onion to see what lies at the heart of all the mandates, failures and expense of the Feudal Communications Commission.

Lord Wheeler’s announcement tells us serfs that we’ve experienced a kind of extortion for decades. See, those of us who get cable television – and that means pretty much everyone who can afford it, since the FCC mandated a few years ago that broadcast stations stop broadcasting in analog signals – are asked by the cable providers to use “boxes” in order to decipher the cable signal. But we rent those boxes, paying a fee to the cable provider each month for the box, in addition to our cable programming package.

Being the kind of hip and happenin’ guy who rides the crest of new technology, Mr. Wheeler is proposing that cable companies provide an app to let paying customers stream that cable content on any device they choose, thus eliminating the “box fees” forever.

Here is part of the mandate:

(P)ay-TV providers will be required to provide apps – free of charge – that consumers can download to the device of their choosing to access all the programming and features they already paid for.

But, if this were in the best interest of consumers, wouldn’t the providers be incentivized to offer the option? After all, competitors might enter the market and beat their competition.

In fact, many, such as Comcast/XFinity already are. But the reason this has taken a while and has been sporadic is because of…

Yeah, you got it, FCC regulations that have stifled competition.

In 1996, Congress passed its shiny new “Telecommunications Act” which, among other things, "gave" municipal politicians the "power" to decide which cable providers could do business in their area. This political lever has been used to block certain providers who don’t "play ball” with local politicians. It also means that, in most towns, there is only one cable television provider, and in many cities, there are only two. The only alternative to cable has been dish, but for some, especially those in snowy areas, this isn’t always a viable option.

This lack of competition has stifled innovation and kept costs up, creating monopolies or oligopolies sustained by government dictate.

The issue actually goes even deeper than the 1996 Telecom Act, and, in fact, touches on the telephone monopoly upheld by the US government until the late 1980s. Upon the breakup of “Ma Bell,” the Federal government dictated that the newly created “Baby Bells” could have sole control over land/telephone pole lines, and that “parallel lines” could not be laid by upstart cable TV companies. This was the beginning of the power consolidation in the cable market, and the problem was created – again – by government.

Mr. Wheeler’s answer is just more command-and-control. And now, because of the way the feds have already tilted the market, content creators who have made licensing agreements with content providers run the risk of seeing their material used in ways they had not foreseen.

For example, Comcast owns NBC, and NBC owns Hulu. Although Comcast grew to become huge in part because it was able to dominate in local markets thanks to the 1996 Telecom Act, it has arranged its business model by tying together the creation and provision of content. But if Comcast is forced to allow its content to be shown on any device, including devices that are not licensed by Comcast cable, then a large portion of its revenue stream will be lost, which, in turn, will affect the content it can create.

As the Center for the Protection for Intellectual Property notes:

Put simply, the proposed rules would take away the ability of creators and copyright owners to license their works on their own terms. It would give third parties all of the benefits afforded to pay-TV providers by their agreements with copyright owners without the burdens of paying a license or agreeing to the underlying contract terms. This isn’t about “the box,” and it isn’t about what consumers do with the creative works they receive in their homes. The issue is what goes into “the box,” and more importantly, how it gets there.

Let’s analogize without necessarily getting into the murky waters of “Intellectual Property” and whether there should be laws protecting it... Imagine you run a bookstore chain and publishing house. You invest in tablets that allow consumers to read your authors’ books exclusively, or perhaps at a discount, because the authors know you promote them very well, and have a large consumer base. Say that you charge a fee to customers for this tablet service, a fee of a dollar a month.

What happens if the feds order you to allow your content onto any device?

The answer is clear. Not only do you lose money, in lost sales of your devices, your authors and those you might hire in the future lose money from your company.

What Mr. Wheeler proposes is merely an additional insult to consumers, piled on top of previous mandates and decrees from DC that have slowed innovation and kept costs higher by reducing competition. This is a continuation of the FCC practice of unconstitutional commands going back to its origins as the Federal Radio Commission in the early 20th Century.

The first federal law established to “regulate” radio transmissions was the Radio Act of 1912, which reserved to federal bureaucrats and the military nearly half of the useable spectrum. The other half was magnanimously offered to the American people through licenses issued by the Secretary of Commerce.

Left languishing in the virtually nonexistent policy debate were the essential questions of whether it was appropriate, constitutional or economically productive for Washington politicians and bureaucrats to control the airwaves.

Was there something magical about the radio spectrum that made it different from other natural resources in 1912? Did spectrum scarcity justify government seizure and ownership? Did the fact that radio broadcasts could cross state borders give federal politicians the green light to play God?

The policy was reiterated and expanded under the Federal Radio Act of 1927, and, again, during the Roosevelt Administration, to become the Federal Communications Commission. The commission has been used as a political tool ever since, playing favorites, delaying television by five years to benefit radio owners, and bringing lots of lobbying money to Congress decade upon decade.

The way to avoid problems in the market is to actually allow for a market, not dictate to it via law. But since 1912, the politicians have recognized a source of power in controlling communications. Free speech is out the window. Competition is manipulated and turned into favoritism, and the cronies and federal feudal lords pat themselves on the backs for “helping us” handle problems their own policies created. Mr. Wheeler’s mentality is nothing new.

But it is still stunning.