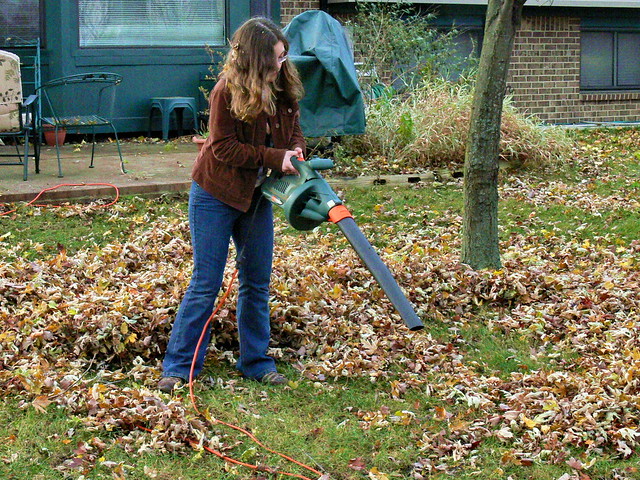 New Jersey has an undeserved reputation as a cesspool of urban decay, a politically corrupt, bureaucratic dystopian nightmare trapped in a forest of smelly Doric, Ionic, and Corinthian smokestacks and drowning under the weight of its political icons’ bad decisions. In many ways, it is seen as the ugly stepchild of the already ugly New York City -- a place where many of New York’s worst political ideas migrate, take root, and spread like poisonous fungus throughout the land.

Sadly, the troubled town of Maplewood, located a few minutes south of Seton Hall University, seems to be doing all it can to reinforce this image.

Already reeling from the not-so pleasant reality that its school district had Fifth Grade students make mock slave auction posters and, later, students in the elementary school system engaged in and video-recorded a self-styled mock slave auction, the town overseers on April 7 unanimously passed an actual ban on commercial leaf blowers. Because, well, a town just can’t have enough controversy.

Jessica Mazzola notes for NJ. com that the ban will last from May 15 to Sept. 30 each year.

During the rest of the year, landscapers can't use the machines on Sundays, and both residents and businesses can only use the blowers during certain hours the rest of the week (Mondays through Fridays the blowers can be used from 8 a.m. to 6 p.m., Saturdays from 10 a.m. to 5 p.m., and on Sundays, residents only can use them from 11 a.m. to 5p.m.).

Memorize that yet? Residents in town better do so, because fines will be incurred by anyone transgressing the great Oracles of Maplewood.

To be fair, leaf blowers certainly can stir up dust and allergens that cause people problems, and they are noisy. In fact, Ms. Mazzola notes:

The new rule, the town's lawmakers said, is meant to decrease noise and environmental pollution in the community.

But there are many things in the daily lives of Maplewood residents that increase noise and pollution. For example, state Route 124 runs directly through the town, and Interstates 280 and 78 are located nearby. Since federal highway safety mucky-mucks note in official releases that highway noise is generally 30 to 35 dB(A) louder than what most humans like, one wonders why the town council is not banning highway travel to reduce noise and air pollution.

The obvious reply from the authoritarians is that, according to them, getting to work is requisite, while landscaping is not.

But what about the people doing the landscape work?

The controversial ban has elicited mixed reactions from residents, and outspoken opposition from companies that serve the area, and the New Jersey Landscape Contractors Association trade group… "We are already planning to file an injunction" against the ordinance, Gail Woolcott, the association's director of operations, told NJ Advance Media Thursday. "That will at least stall them from being able to enact the ordinance."

Woolcott added that most of the landscapers already try to use their equipment at times that will not bother neighbors, and that during the summer, the blowers are used less often for handling leaves than they are to clear fertilizer (and, one would assume, soil and glass clippings, and bad political ideas) from driveways and paths.

The effect on their livelihoods will be dramatic, forcing them to use medieval technology -- rakes, hoes and brooms – to do the work, increasing their work time four-fold, and decreasing the time left over to work elsewhere. This will increase prices not only for those in town, but for clients elsewhere, giving relative price advantages to those who do not do business in Maplewood while doing business outside of it.

Maplewood is an example of what economists and political philosophers call “Little Leviathan," whereby the agency of the state, even in the tiny form of a town government, imposes its will on everyone, rather than allowing people to handle their own disputes when they arise. A proponent of the ban noted that a similar thing has been instituted in over 90 U.S. municipalities.

One can only hope that the trend does not carry any further on the wind.