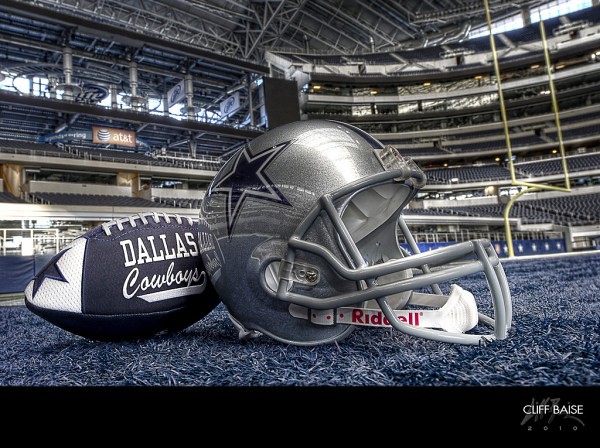 NFL league officials informed the Dallas Cowboys Wednesday that the team would not be allowed to wear a helmet decal honoring Dallas police in preseason or regular season games this year.

The Cowboys unveiled the "Arm in Arm" decal on July 30, the first day of training camp, during a ceremony meant to promote unity between the Dallas community and local law enforcement. That same day, players, coaches and officials walked onto the field arm-in-arm with Dallas Police Chief David Brown, Dallas mayor Mike Rawlings and family members of the officers murdered during the shooting in Dallas last month.

However, the decal was deemed unacceptable for wear during games by the NFL, which has long had a staunch, almost cold-hearted, uniform policy. According to Fox Sports:

Just last season the league denied the request of Steelers running back DeAngelo Williams to wear pink gear all season in honor of his mother, who passed away from breast cancer. Williams was also fined for having the message "Find the cure” printed on his eye black during a game.

Everyone has to be uniform with the league and the other 31 teams. We respect their decision. [...] There are so many wonderful, wonderful causes, the league has to be careful. If you allow one, then what do you do about every team that has a great reason to have something on their helmets? There are tons of things out there that need to be recognized. Once you open that Pandora's box, how do you ever stop?

However, Sergeant Demetrick Pennie, president of the Dallas Fallen Officer Foundation, was irate that the Cowboys could not wear the decals in games. He told TMZ:

The NFL had an opportunity to be leaders and advocates for change in law enforcement. These teams and players have a spotlight on them and could have helped bring awareness. If a uniform policy is keeping them from this, then why don’t they have every team wear the decals? [...] These are our friends and our loved ones [...] it hurts to not have the NFL fully support us.

I tend to agree with Pennie on this one. While it's understandable that the league doesn't want an overload of paraphernalia on team uniforms, a symbol of unity in these divisive times seems like an appropriate exception to their strict rules.