It’s become clear that one of the most underreported stories is the “white violence” being visited on People of Color (POC) at our elite universities. Gangs of white students emerge from their gender studies classes and coloring book therapy groups to terrorize nonwhite students with their … presence?

Well, it seems to be a big problem at U.C. Berkeley, where minority students seek the refuge of a Person of Color House, according to a copy of the POC house rules someone posted to Reddit, where they came to the attention of The Campus Fix.

“Many POC members moved here to be able to avoid white violence and presence …” reads the introduction to the house rules. That being the case, everyone must “respect their decision of avoidance …”

Certainly, but what if a POC house resident is so reactionary as to be on speaking terms with violent white people? What if they’re so retrograde as to actually invite a white person to the POC house as a guest? As chilling as it is to imagine a self-respecting POC voluntarily associating with whitey, it could happen. That would introduce a white presence to the POC house, with the corresponding menace of white violence.

Thankfully, the house rules foresee such a contingency: 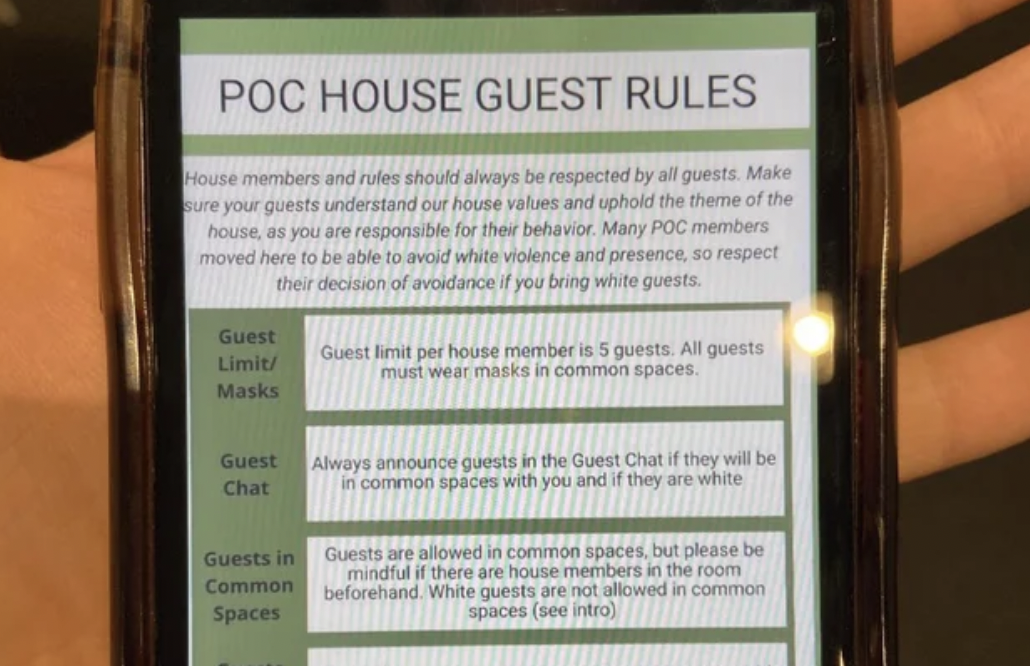 Whew! Now that makes sense. If somebody makes a decision of avoidance of violent white presence the last thing you would want to do is traumatize he/she/they by inviting Chad and Becky home to work on that project for your18th Century Queer Composers class.

Oh, and don’t bring those bigots in your family over either. As the rules make clear: “Queer, Black, and Indigenous members should not have to avoid common spaces because of homophobic or racist parents/family members.”

Meanwhile, it’s time our institutions addressed the scourge of white presence on our campuses.

Rutgers professor: "White people are committed to being villains," "We gotta take these MF'ers out."

This professor spewed hatred on a YouTube video with @TheRoot. pic.twitter.com/QrGsv77CCC