That’s an honest-to-God headline that somehow made it past the editors’ desks over at The Root, a race-baiting rag that’s...ok, they're not exactly known for giving half a moment’s thought to the crap they spew. 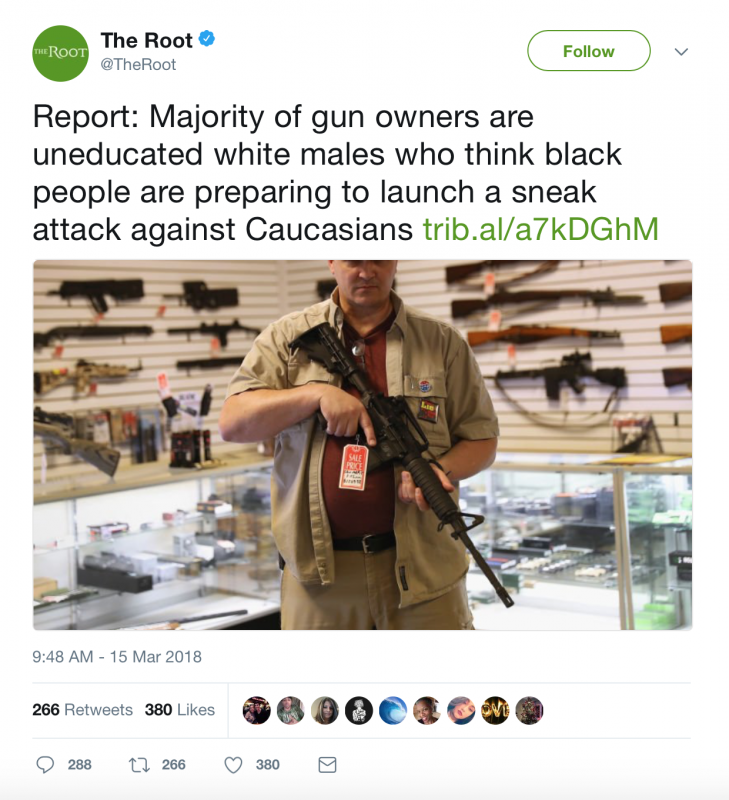 Here’s the gist. To make his point that all gun owners are mostly racists who hate black people, The Root’s Michael Harriot cites data showing that 78 percent of legal gun owners are white. (Note: we aren’t counting those who have guns illegally, like thugs in Chicago, because that might skew their data. So pay no mind to that.)

On top of that, Harriot claims studies show about 65 percent of gun owners are men, and that most of them are Republicans.

Let's assume all this is correct. It gets worse.

Finally, the Root purports that gun owners “are racist.” Why? Here’s why.

“A 2013 study shows that a 1-point increase in the index they used to measure racism increased the chance of gun ownership by 50 percent,” Harriot claims.

Now, Harriot doesn’t link to the study, or say who “they” are. Nor does he explain what “index” he’s referring to, or provide any information to help analyze whatever data they supposedly came up with. In fact, in reading this sentence, I’m not even entirely sure what it’s supposed to mean.

But Harriot apparently has it all figured out.

“Pew Research shows that a larger percentage of blacks have been threatened with a firearm or know someone who has been shot, but white men are more likely to say they need a gun for protection. And while most blacks find gun violence to be a problem in their community, most Republicans say more guns would lead to less crime,” he says.

“So there you have it. White men need guns to pretect [sic] them from the evil Negro monsters roaming the country,” Harriot concludes.

Perhaps most gun owners are Republicans not because they’re racist (party of Abraham Lincoln, anyone?) but because the GOP is traditionally the party that defends Second Amendment rights.

And perhaps a large percentage of blacks report being threatened with a firearm because high percentages of them live in urban areas where gun violence – often from those of their own skin tone – is much more prevalent.

But just completely ignore all of that logic and reasoning, Mr. Harriot. After all, you’ve got an agenda to push. It simply must be because all us whiteys toting pieces are simply terrified of the dark-skinned bogeyman.