There’s nothing quite like the “tolerance” of collectivists. As we know, they’re all in favor of free speech for themselves and those who will help increase the size of the state, but they rarely respect the speech rights of others.

In fact, if you oppose the state or the growth of it, collectivists likely will not only characterize you as a fascist or Nazi, they might also target you for physical violence to shut down your expression of opinion.

All for freedom, of course, never to favor the state over the individual.

And on June 30th, another example of this fair treatment and peaceful conduct came to us by way of Samantha Lillian Elaine Pollara, a staffer working for Mayor Pete Buttigieg, posting on the left-leaning Facebook.

Later that day, Congressman Matt Gaetz (R-FLA) found the Facebook antics, and alerted people via Twitter, and good for him, particularly because her statements encouraged people to commit assault and battery by throwing bottles of urine – at him. 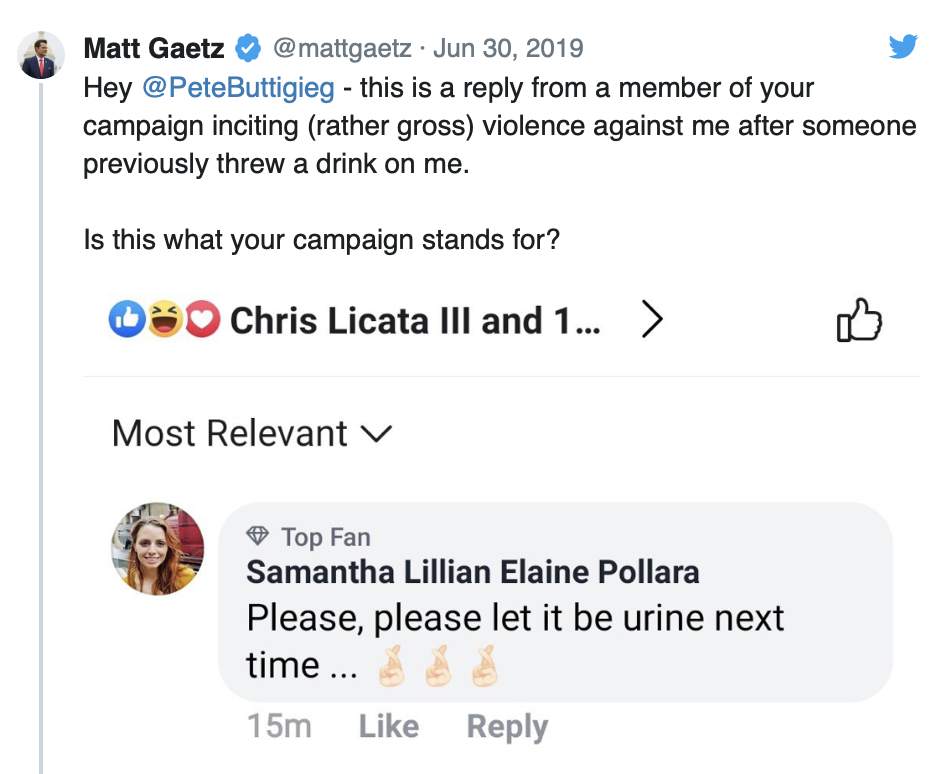 This coming after police already had arrested Amanda L. Kondrat’yev for assaulting Gaetz with a milkshake during one of his Town Halls in Pensacola, on June 1.

Noted Gaetz in his Tweet of the screencap of Pollara’s kind and caring statement:

Hey @PeteButtigieg - this is a reply from a member of your campaign inciting (rather gross) violence against me after someone previously threw a drink on me. Is this what your campaign stands for?

What did Samantha say regarding the milkshake assault in Pensacola?

As his screencap shows, she said:

Please, please let it be urine next time…

And she added the extra-classy touch of ending the post with three “crossed-fingers” emojis.

Some might think that this kind of flip online pose is simply an outgrowth of internet culture, where it’s easy to posture and look enflamed because one never meets the object of scorn, where childishness becomes woven into the fabric of interaction because people surf and skim and try to score quick rhetorical points by posting short, pithy, sarcastic jibes and/or memes or images to strike hard and fast, rather than having a thoughtful debate.

That’s certainly true. But it’s only part of the phenomenon, a phenomenon that is very old, and has been readily visible to anyone willing to look.

The point is that there’s something very wrong with many collectivists. Collectivism as a political system dictates the elimination of respect for other individuals. It subsumes the individual beneath the power of the collective, hence respect for property and person are eliminated.

Collectivists work hard to hide this. They couch their anti-individual worldview in fuzzy rhetoric, in kindly-sounding terms like “tolerance” and “love”, and some people buy into the idea that if only “we” would take control of the state, “we” could make everything fair and equal. But the reality is far different.

The problems goes back to Plato and his elitist claim that the ideal city state – the state created to promote justice – would be predicated upon the “Noble Lie” that some people were just more enlightened than others, and, hence, fit to rule.

It’s a poison that saw Jean Jacques Rousseau, a man who fathered five children and gave them all to the French Foundlings Society, blame the idea of private property for him not being able to enjoy a father’s embrace of his children, and, later, saw him write a vicious attack on private property as the source of “inequality”.

It’s the monster of Marxism that saw Marx, the so-called “economist” and political writer, demonize capitalists, claiming that they were the scions of feudalism and had, in essence, taken the place of the feudal lords, when it was private property rights that spawned the Industrial Revolution and its growth, helping improve the living standards of millions who had suffered under feudalism. It is the monster of Marxism that saw Stalin’s Communist Party actually create Antifa as a way to infiltrate the National Socialists of Hitler’s Germany and recruit them to the cause of international collectivism. It is the monster that supposedly favored free speech and protest, but merely used it as a means to achieve power, and then instituted the most devastating speech police system ever devised by man.

This is the “peaceful”, “tolerant” mindset that sees “activists” in Portland, Oregon, attack a peaceful journalist, Andy Ngo, sending him to the hospital with a brain hemorrhage, merely because he is a writer who does not support the expansion of the state.

According to Gaetz, Pollara apologized for her childish promotion of assault and battery. But she should have been humane enough to have avoided calling for such an attack in the first place.

And while she apologized after being called out, many other collectivists are apologists for this kind of violence.

CNN jaw-wagger Chris Cuomo is one such apologist, a man who has repeatedly mischaracterized or rationalized Antifa violence. In 2017, he went so far as to obliquely applaud Antifa in the same manner as one would applaud the men who stormed the beaches of Normandy on June 6, 1944, Tweeting, “Antifascists disrupting a large gathering of white supremacists” along with a photo of US soldiers fighting for their lives on the French coast.

As long as people like Cuomo and Pollara embrace collectivism, they will continue to excuse and rationalize away the rights of others, even as they portray themselves as noble and find solace in their posturing.

But virtues are not found in “signals”. They are found in actions, actions based on the respect one has for individuals, and arming the state with more power over individuals does not serve to protect them. History has shown it serves to harm them.