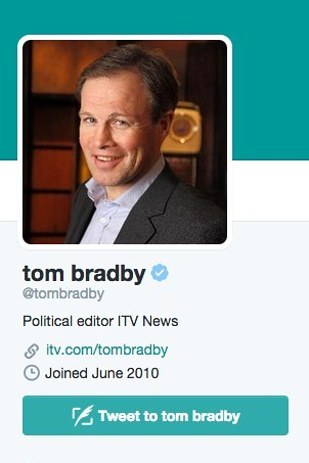 Chalk it up to poor spelling due to alcohol consumption or pure ignorance, but as Tom Brady was leading his team to a Super Bowl victory last night, fans and detractors alike took to Twitter and sent dozens of glowing and angry Tweets to a British political commentator, named Tom Bradby.

Here are some of the Tweets to intended to go to the Patriots quarterback that went to Bradby instead. (Keep in mind that we could only show you some of them due to the fact that the vast majority contained profanity and this is a family website):

Since Tom Brady the quarterback does not have an official Twitter account, Bradby took it upon himself to respond to the outpouring of affection and disdain:

But, like I mentioned before, Tom Brady has no Twitter page, so Bradby is going to have to take the brunt of this until the elation/disgust over the Patriot's victory dies down.

If you'd like to see some of the more R-Rated Tweets addressed to Bradby, head over to Buzzfeed.