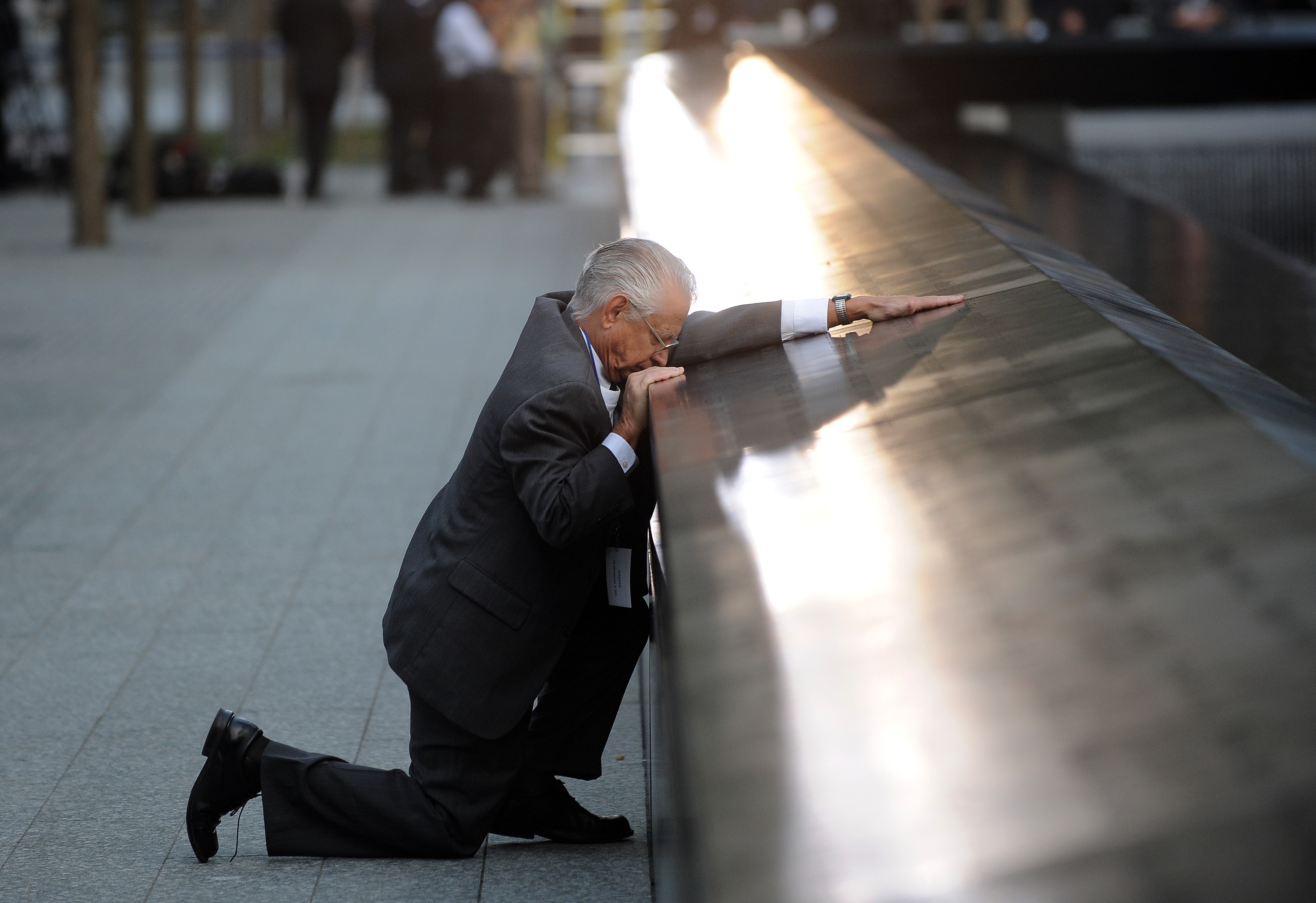 Robert Peraza, who lost his son Robert David Peraza, pauses at his son's name at the North Pool of the 9/11 Memorial.

The University of North Carolina at Chapel Hill has come under fire recently for offering a class called “The Literature of 9/11,” a freshman seminar chock full of anti-America, terrorist-sympathizing material that supposedly holds no bias or agenda whatsoever and should be completely embraced by the academic community.

A recent article in The College Fix explains the course offers students plenty of reading material that’s critical of America and her values, but none from the perspectives of the victims of the 9/11 terrorist attacks or those left behind to mourn lost loved ones.

The Reluctant Fundamentalist, by Moshin Hamid

This fascinating little tale tells the story of Changez, a Pakistani immigrant and Princeton grad living in New York City at the time of the 9/11 attacks. In the book, the main character -- despite living in America and benefiting from its economy and educational system -- describes his feelings following the attacks as such:

But at that moment, my thoughts were not with the victims of the attack – death on television moves me most when it is fictitious and happens to characters with whom I have built up relationships over multiple episodes – no, I was caught up in the symbolism of it all, the fact that someone had so visibly brought America to her knees…I was the product of an American university; I was earning a lucrative American salary; I was infatuated with an American woman. So why did part of me desire to see America harmed? I did not know, then; I knew merely that my feelings would be unacceptable to my colleagues, and I undertook to hide them as well as I could. When my team gathered in Jim’s room later that evening, I feigned the same shock and anguish I saw on the faces around me.

Despite only feeling sympathy for TV characters rather than real people being murdered on live television, Changez is suddenly able to locate his inner empathy switch when he sees Afghanistan being bombed by the U.S. military.

In the Shadow of No Towers, by Art Spiegelman

Here’s Amazon summary of the novel:

Spiegelman and his family bore witness to the attacks in their lower Manhattan neighborhood: his teenage daughter had started school directly below the towers days earlier, and they had lived in the area for years. But the horrors they survived that morning were only the beginning for Spiegelman, as his anguish was quickly displaced by fury at the U.S. government, which shamelessly co-opted the events for its own preconceived agenda.

Poems from Guantánamo, by Mark Falkoff

From an Amazon summary of the novel:

Since 2002, at least 775 men have been held in the U.S. detention center at Guantánamo Bay, Cuba. According to Department of Defense data, fewer than half of them are accused of committing any hostile act against the United States or its allies. In hundreds of cases, even the circumstances of their initial detainment are questionable. This collection gives voice to the men held at Guantánamo. Available only because of the tireless efforts of pro bono attorneys who submitted each line to Pentagon scrutiny, Poems from Guantánamo brings together twenty-two poems by seventeen detainees, most still at Guantánamo, in legal limbo.

From an Amazon summary of the book:

Sand Opera emerges from the dizzying position of being named but unheard as an Arab American and out of the parallel sense of seeing Arabs named and silenced since 9/11. Polyvocal poems, arias, and redacted text speak for the unheard. Philip Metres exposes our common humanity while investigating the dehumanizing perils of war and its lasting effect on our culture.

The Sirens of Baghdad, Yasmina Khadra

In case you weren’t aware, America is apparently responsible for creating terrorists. It's really not the terrorists' fault. Here’s the summary of this compelling novel:

A young Iraqi student, unable to attend college because of the war, sees American soldiers leave a trail of humiliation and grief in his small village. Bent on revenge, he flees to the chaotic streets of Baghdad where insurgents soon realize they can make use of his anger. Eventually he is groomed for a secret terrorist mission meant to dwarf the attacks of September 11th, only to find himself struggling with moral qualms. The Sirens of Baghdad is a powerful look at the effects of violence on ordinary people, showing what can turn a decent human being into a weapon, and how the good in human nature can resist.

“Stuff happens;” Such was Donald Rumsfeld's response on April 11, 2003, following the infamous looting and pillaging of Baghdad. In David Hare's powerful new play chronicling the extraordinary process leading to the American invasion of Iraq, this statement provides entrée into the melee of diplomacy, political power, and terrorist vendetta still making headlines around the world. Using direct quotes meticulously culled from interviews and public appearances, combined with the playwright's nuanced reimagining of what went on behind closed doors, Hare has fashioned a historical narrative and human drama that presents the Iraqi conflict in all of its haphazard notoriety. Stuff Happens uses a uniquely evenhanded approach to a deeply contested invasion--seen from the perspective of international leaders and journalists, as well as Iraqi refugees--and raises a series of provocative questions regarding the most heartfelt and manipulative machinations of domestic and international politik.

After facing scrutiny from the right over the course content, UNC officials defended the class and its professor, Neel Ahuja (whose apparent views you can read more about here) saying, “we believe absolutely in academic freedom for all our faculty” and that “discouraging faculty members from presenting controversial or dissenting viewpoints in class compromises the critical thinking and free speech essential to genuine education.”

University officials added, “The student who wrote the first piece condemning the class for having an ostensibly slanted perspective had neither taken the course nor read any of the course texts,” and therefore couldn’t possibly be in a position to criticize the class.

But move along folks. No agenda to see here.