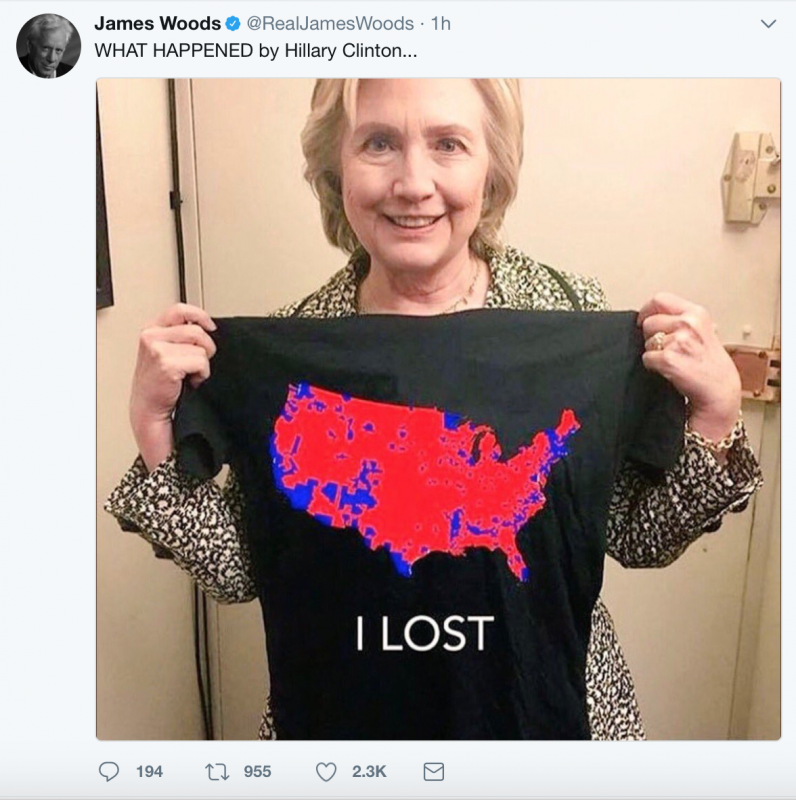 On Thursday morning the cover and title of Hillary Clinton's forthcoming book was revealed. The book is called "What Happened," and it explores Clinton's failed 2016 presidential run.

According to several press reports,  and a statement from publisher Simon & Schuster, Clinton “lays out how the 2016 election was marked by an unprecedented assault on our democracy by a foreign adversary. By analysing the evidence and connecting the dots, Hillary shows just how dangerous the forces were that shaped the outcome, and why Americans need to understand them to protect our values and our democracy in the future. The election of 2016 was unprecedented and historic. What Happened is the story of that campaign and its aftermath – both a deeply intimate account and a cautionary tale for the nation.”

After the title and the theme of the book was released, conservative actor James Woods tweeted a summary and alternate explanation: "Well, she lost." Woods tweeted a photoshopped picture of Clinton holding up a t-shirt featuring an American map covered in red - the counties that voted for Trump - and the words "I Lost" at the bottom.

The implication is that Clinton lost because, well, more people voted for Donald Trump.

According to NBC News, in 'What Happened' - "the former senator, first lady and secretary of state dives into mistakes she made along the campaign trail and the 'devastating' and unexpected loss to President Donald Trump".

“In the past, for reasons I try to explain, I’ve often felt I had to be careful in public, like I was up on a wire without a net,” Clinton writes in the books opening, “Now I’m letting my guard down.”

According to a press release from Simon & Schuster, Clinton "speaks about the challenges of being a strong woman in the public eye, the criticism over her voice, age, and appearance, and the double standard confronting women in politics.”