Why? Kathy Griffin Calls For Doxing of Covington Catholic Students: 'I Want NAMES'

Kathy Griffin lives on the “D-List.” She used to openly admit that she was a nobody. Now, Griffin likes to instigate hate against people that don’t share her world view. Does she do this because that’s what she believes? Does she pander in order to possibly receive more work in the Hollywood Communistic Cult? Or, is Griffin merely trying to stay relevant? The answer appears to be yes on all three questions, but the kinda comedienne has gone too far.

After being inundated with the Covington Catholic High School/Native American drummer fake news story for the last couple of days, the left has been further exposed for who they really are — liars and race-baiters.

Griffin was no exception to that, going so far as to tweet that the Covington Catholic students should be doxed for their perceived racism.

Take a look at what this moron tweeted out on Sunday: 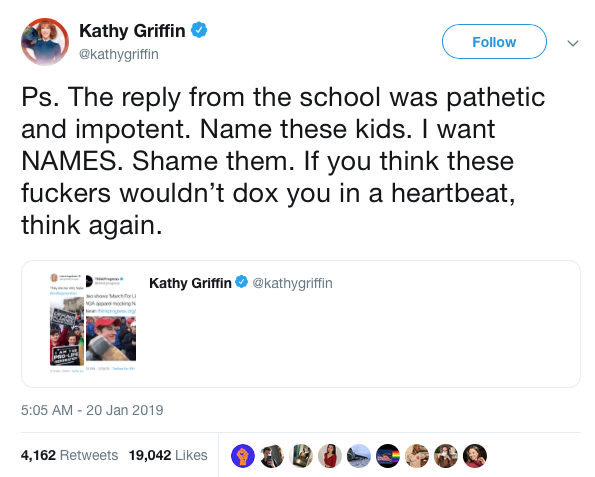 What about the school’s response was “impotent?” The school released a statement saying that they were considering expelling the students that were involved in the incident. I don’t know what grade of elementary school Griffin finished, but being expelled from a school can ruin a child’s life. That expulsion follows the kid around for a long time.

That apparently isn’t enough for Griffin. If it were up to her, people would be storming these kids’ houses with pitchforks, demanding their “pounds of flesh” — as Native American race hustler Nathan Phillips so eloquently said about the high school boys' motivation.

I would call for a doxxing of Kathy Griffin, but I’m not that petty and don’t resort to such gestapo tactics. Plus, I don’t really think anyone wants to know where Griffin dwells anyway.

For people that profess to hate Nazis so much, they sure like to employ their tactics.