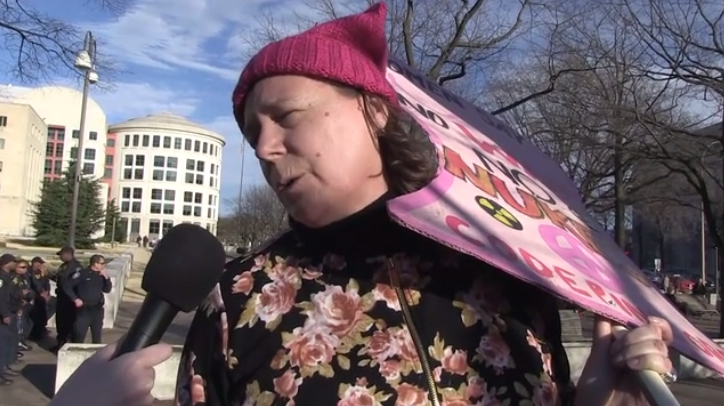 Women across the country took to the streets on Wednesday to protest in the name of feminism, but apparently didn't expect their efforts to achieve much.

At a protest at the Department of Labor in Washington, D.C., activists called for “dignity, equality, & respect” and smashing the “white supremacist capitalist patriarchy.”

According to the event description on the “One Billion Rising” website, the event aimed to bring an “end to workplace violence and harassment and to promote pay equity, one fair living wage, paid leave, and labor rights at work.”

Its organizers, however, were not the most optimistic.

MRCTV attended the protest and spoke to a representative from the event co-sponsor CODEPINK.

CODEPINK’s DC Action Team Leader, Ellen Taylor, told MRCTV, “I’m here today because it’s International Women’s Day and I am a woman. I have a lot of concerns about equality, women are not afforded respect and equality.”

“We’re protesting the fact that things suck for women a great deal of the time,” Taylor continued. “What it’ll accomplish? Probably not a great deal. Men don’t pay attention, and we know that’s a fact, so, there you go. But it’ll make us feel better.”

MRCTV also spoke to participants about why they were attending the protest:

“People are here at the Department of Labor in particular in order to speak out against way corporations are treating workers in general," one attendee told MRCTV. "And women in particular are especially at risk and vulnerable to predatory employers."

“The fight for equality is not over," she continued, "and I hope that people really start to see a lot of these issues as intersectional, and, you know, we have a collective liberation, where, you know, none of us are free until others are free, and so those of us who are privileged enough that we could take off work safely and come out to advocate today, that we could advocate on behalf of those who are more marginalized and more vulnerable."

“We’re here supporting black women specifically because the black woman is the most underrepresented, unappreciated, and undervalued person in society,” another protestor explained.

“I’m not sure that many Americans realize that the United States is one of the last developed countries that has failed to ratify an Equal Rights Amendment in our national constitution,” an attendee shared.

“I’m angry, and instead of staying home and just writing on Facebook and other things, I just needed to come out and be out with other people who are just saying what I feel or just kind of yell a few things, get [them] out of my system,” a women told MRCTV.