So Academy Award-winning actress Mo’Nique just filed a lawsuit against Netflix, because she feels that she didn’t get offered as much money as Dave Chappelle, Jerry Seinfeld, Amy Schumer, Chris Rock or Ellen DeGeneres because she’s a black woman. Give me a break, lady. 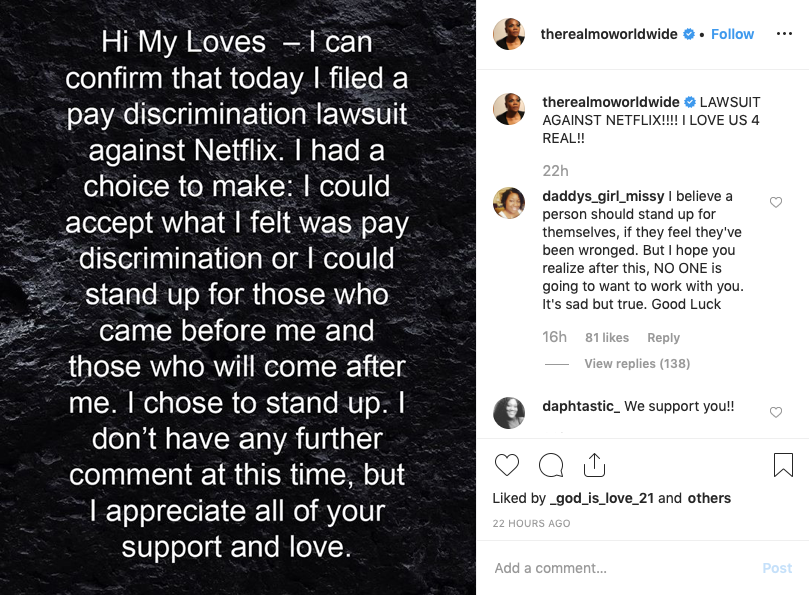 The lawsuit claims that the $500,000 Mo’Nique was offered by Netflix for a one-hour stand-up comedy special was “discriminatory” and “perpetuates the drastic wage gap forced upon Black women in the America’s workforce,” according to The Wrap.

Sorry, Mo’Nique being paid less — despite being an Academy Award-winner — than comedians like the ones I listed above has nothing to do with her being a black woman. It’s supply and demand. People clamor for new material from Chappelle, Seinfeld, DeGeneres and even Schumer — who might not be funny, but she’s definitely more well-known and has a bigger following than Mo’Nique.

I am a big stand-up comedy fan, but I have never once heard anyone say that they hoped Mo’Nique would do a new special in the last few years. That doesn't mean there's been absolutely no call for a special, but if there has been it's been kept pretty hush-hush.

The lawsuit also alleges many instances of racism on Netflix’s part that have absolutely nothing to do with Mo’Nique, but one could guess that they were included to give courts a history of racial problems.

Other accusations made against Netflix in the filing include that the company turned ” a blind eye” to racial abuse Kevin Spacey committed against black workers on the set of “House of Cards,” including use of the n-word directed at black security personnel. It also accuses Netflix executives of using racist language, and calls out Netflix’s Board of Directors for having “historically lacked racial diversity.”

Listen, I’m not discounting that as a stand-up comedian Mo’Nique could actually be funny. I haven’t seen much of her material, but she’s been around for a while so she’s got to be doing something right. And I'm also not defending Netflix. I've got my own issues with the streaming giant, but those are separate from this story. I'm simply calling Mo'Nique out for thinking she's on the a similar level to some very big names, some of which are already living legends in the comedy community.

But, for her to basically be insulted for being offered half-a-million dollars is ridiculous considering she’s nowhere near the level of Chappelle, DeGeneres, Seinfeld or Rock. Because she feels disrespected by the offer, she feels she can claim not only racism, but sexism as well. Maybe, just maybe, if the first stand-up special was received well, Mo’Nique would’ve been paid a lot more for another.

It looks like she shot herself in the foot on this one.