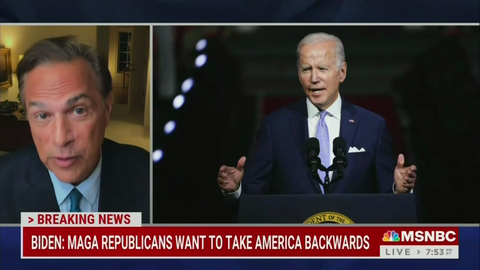 Doing the dirty work of Joe Biden, MSNBC on three separate shows vilified half the country, comparing the Democrat to Abraham Lincoln’s fight to save the union or Franklin Roosevelt’s rhetorical fight in 1940 against fascism. NBC News historian Michael Beschloss on Thursday night and Friday morning linked political disputes in 2022 to the most perilous moments of 19th and 20th century. Appearing on Thursday’s Last Word, he told host Lawrence O’Donnell: “Joe Biden is saying, ‘Here we are, I am president, but the democracy is in peril, like 1860, like 1940.’ We are in a situation where few things go the wrong way, we could lose our system, our rule of law, our free and fair elections.”  Regarding Biden’s very angry speech, Beschloss echoed the attempt to slime anyone who disagrees with Biden: “And I think one thing that makes presidents look very good in history is when they stand up to that moment and say, you know, ‘This is what it is. Fish or cut bait, maybe all lose as a result.’” 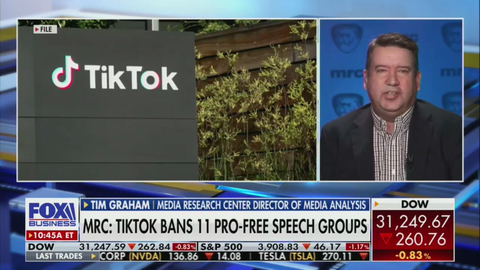 According to Tim Graham, there’s an easy way to know if TikTok is an anti-American communist-backed channel: Does it hate freedom? The Executive Editor of NewsBusters appeared on Varney and Co. on Thursday to address the popular social media site “permanently banning” 11 pro-free speech organizations. Talking to Ashley Webster, Graham explained, “We have a communist Chinese-owned social media outlet that maybe we shouldn't even allow in the United States, dedicated to showing youth how to dance or whatever. And what do they seem to ban? Young Americans Foundation, Students for Life of America.” Graham drew this conclusion: “When they don't like freedom, when they don't like videos that attack communism, you might just guess it’s a communist channel.” 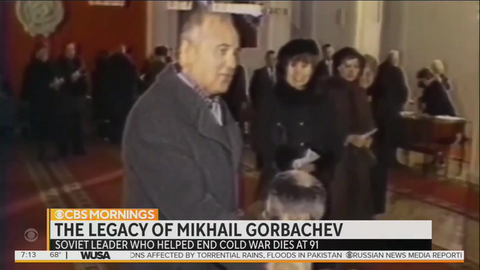 Nets Dismiss Reagan to Build Up Gorbachev: ‘East Germans Tore Down the Wall Themselves’
Scott Whitlock

In order to build up the “monumental,” “acclaimed”  Mikhail Gorbachev’s role in ending the Cold War, the networks on Wednesday dismissed Ronald Reagan. On CBS Mornings, reporter Elizabeth Palmer huffed, “In the end, the East Germans tore down the wall for themselves, but Gorbachev didn't stop them.” The journalists were effusive in their praise for the communist, who passed away on Tuesday at 91. Good Morning America co-host George Stephanopoulos cheered, “Now to the death of one of the most monumental figures of our time, Mikhail Gorbachev. Tributes poured in for the last leader of the Soviet Union who presided over the end of the Cold War and steered his country towards democracy.” 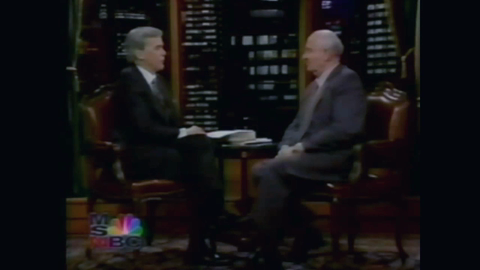 The late talk radio star Rush Limbaugh coined the phrase “Gorbasm” for the ecstasy that many reporters felt when covering Soviet dictator Mikhail Gorbachev, who died at age 91 on Tuesday. It’s true that Gorbachev was obviously less brutal than previous communist rulers. But his Soviet Union was hardly an enlightened, peace-loving democracy. While Gorbachev relaxed the repression of previous years, he did not shut down the Gulag, allow a free press, or permit the free expression of religion. When the Baltic republics pushed for sovereignty in early 1991, Moscow’s Brezhnev-esque response was to use tanks to suppress pro-democracy forces in Lithuania and Latvia, killing eighteen. Yet journalists elevated Gorbachev far above the freedom fighters, dissidents and democratic, anti-communist leaders like Ronald Reagan and Margaret Thatcher; indeed, the media assigned the Soviet party boss nearly all of the credit for ending the Cold War. Time magazine thought it insufficient to name him merely the “Man of the Year,” so in 1990 Gorbachev became their “Man of the Decade.” 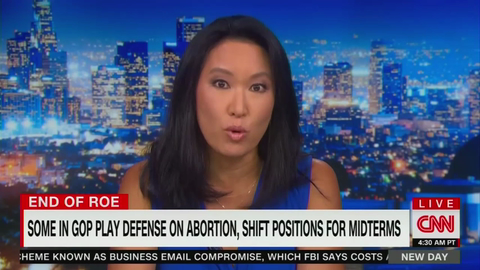 CNN on Tuesday spent over seven minutes hyping Republicans trying to hide their allegedly extreme position when it comes to abortion. Reporter Kyung Lah spotlighted GOP senatorial candidates changing their website now that they have the nomination. But nowhere in the segment was there anything on the extreme stance of Democrats when it comes to abortion. Host Brianna Keilar parroted the Democratic talking points about radical Republicans: “The Supreme Court overturning Roe v. Wade has energized voters and made abortion rights a flashpoint in the midterm elections. It's given Democrats a boost. Now, some Republicans candidates who were strongly opposed to abortion are suddenly softening their stance.” 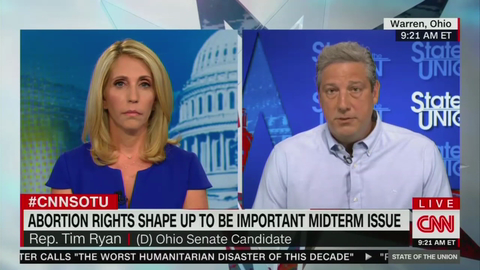 The networks are eagerly pushing the idea that support for abortion rights against an extreme GOP is powering a Democratic comeback in the midterms. What they aren’t telling you about is just how radical many of the Democratic Senate candidates are. For instance, Tim Ryan in Ohio supports abortion up to the day of birth. And yet this hasn’t been a story on the network newscasts. His name has only come up twice in the month of August. Yet, shockingly, it was CNN and anchor Dana Bash who committed journalism and grilled the Democrat on Sunday. Interviewing the candidate on State of the Union, she demanded, “You’re criticizing your Republican opponent for not supporting abortion exceptions. So, I want to ask about your position. What restrictions, if any, do you believe there should be on abortion?” 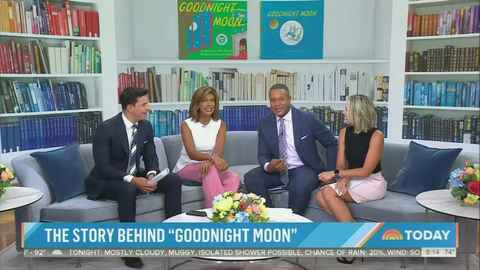 One year ago on Friday, August 26, 2021, 11 Marines, a soldier and a sailor were killed in a suicide bombing during the botched withdrawal of U.S. troops. The network morning shows on Friday (and the evening shows on Thursday night) couldn’t be bothered to mark the somber one year anniversary. There was no mention on the NBC Nightly News, Today, ABC’s World News Tonight, Good Morning America or the CBS Evening News and CBS Mornings. NBC, however, found time to mark a far less important anniversary: 75 years of the children’s book Goodnight Moon. The Today show on Friday featured host Hoda Kotb reading the book and touted how viewers could download her audio recording of it. She narrated, “In the great, green room, there was a telephone and a red balloon.” 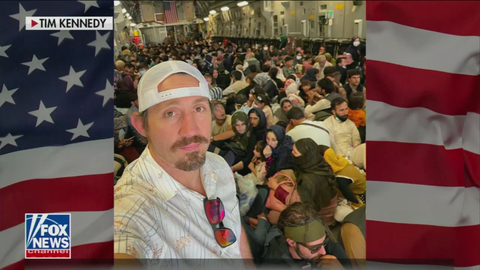 One year ago on Friday, August 26, 2021, 11 Marines, a soldier and a sailor were killed in a suicide bombing during the botched withdrawal of U.S. troops. The network morning shows on Friday (and the evening shows on Thursday night) couldn’t be bothered to mark the somber one year anniversary. Fox News and other cable outlets covered the one year anniversary on Friday. Kudos to them for doing actual journalism. Here's Fox and Friends from Friday. 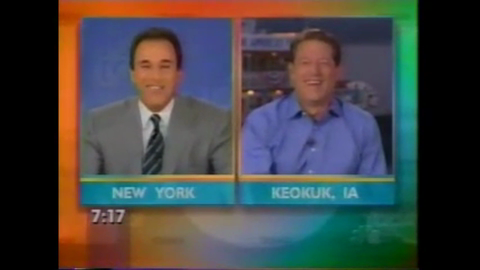 Given what we now know about Matt Lauer and his creepy office with an automatic door lock, his  August 21, 2000 Today interview with Al Gore looks weirder in retrospect. It was 22 years ago this week that the now-disgraced ex-NBC host obsessed over “the kiss” between the then-Vice President and his then-wife Tipper Gore at the 2000 Democratic National Convention: “This is the ‘The Kiss.’... You really planted one on Mrs. Gore.” Lauer was interested in the kiss. VERY interested. 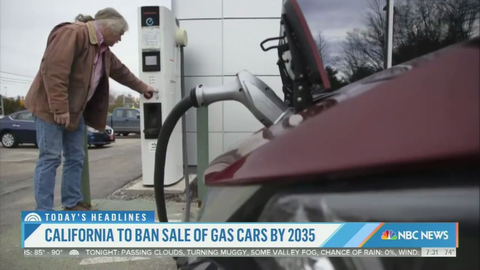 California is aggressively moving to end all gas-powered cars by the year 2035. You might think that would be a big deal on the networks. But you’d be wrong. ABC and NBC responded with a collective yawn on Wednesday night and Thursday morning, allowing 23 seconds and 30 seconds, respectively. But that’s still better than CBS. The network avoided California’s radical move, skipping it on the CBS Evening News and CBS Mornings.