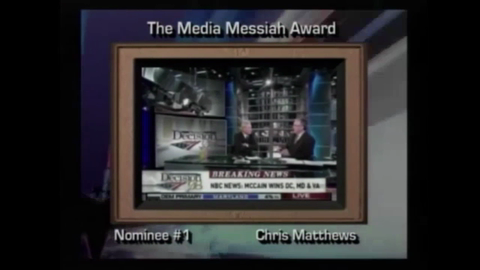 MSNBC co-anchor Chris Matthews won the MRC’s “Media Messiah Award” for declaring during coverage of the February 12, 2008 Democratic primaries that listening to Barack Obama speak, “I felt this thrill going up my leg. I mean, I don’t have that too often.”

A nominee for the “Media Messiah Award” at the MRC’s 2009 DisHonors Awards and gala. 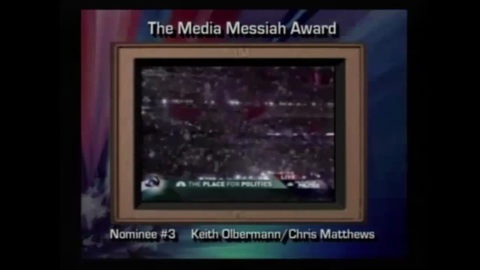 Following Obama’s speech to the Democratic convention, MSNBC’s Keith Olbermann gushed: “Not a sour note and spellbinding throughout.” His co-anchor Chris Matthews agreed: “In the Bible they talk about Jesus serving the good wine last. I think the Democrats did the same.”

A nomineed video for the “Media Messiah Award” at the MRC’s 2009 DisHonors Awards and gala. 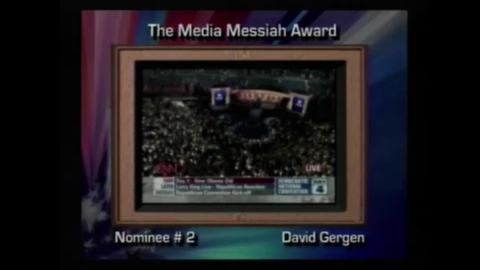 To CNN’s David Gergen, Obama’s August 28, 2008 speech to the Democratic convention was “less a speech than a symphony....a masterpiece.”

A nominee for the “Media Messiah Award” at the MRC’s 2009 DisHonors Awards and gala. 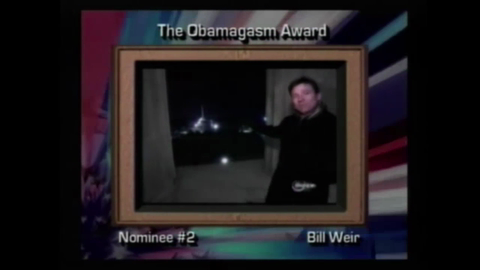 ABC’s Bill Weir won the MRC’s “Obamagasm Award” for his over-the-top fawning on World News on Inauguration Day. “Can national pride make a freezing day fell warmer?” Weir gushed. “From above, even the seagulls must have been awed by the blanket of humanity.”

A nominee for the "Obamagasm Award" at the MRC's 2009 DisHonors Awards and gala. 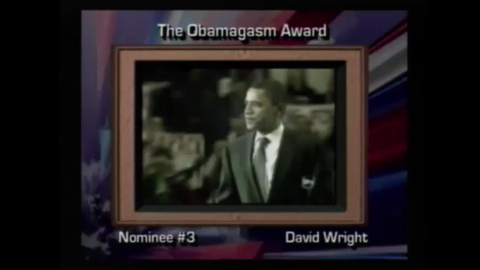 ABC’s David Wright rolled two Democratic mythologies into one story, declaring on the January 28, 2008 World News that the Kennedys’ endorsement of Obama means “today, the audacity of hope had its rendezvous with destiny....Obama is now an adopted son of Camelot.”

A nominee for the "Obamagasm Award" at the MRC's 2009 DisHonors Awards and gala. 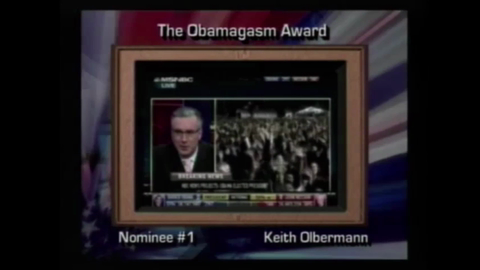 Barack Obama’s election on November 4, 2008, brought out this fawning from MSNBC’s Keith Olbermann: “You’ve seen those videotapes of Walter Cronkite the night that man landed on the moon for the first time....Politically, that’s what this is. This is man on the moon.”

A nominated quote in the "Obamagasm Award" category at the MRC's 2009 "DisHonors Awards and gala. The MRC's President Brent Bozell appears on Fox and Friends to discuss the MRC's annual Best of Notable Quotable awards for the most outrageous liberal media bias. Matthews: Palin Looked Into Camera Like a 'Dolt'
KristineLawrence As said by NBC's Lee Cowan when the Kennedys endorsed Barack Obama for president: "The endorsement brought the Kennedy mystique to this campaign, not in a whisper, but a roar."