Florida Governor Ron DeSantis’ (R) transport of 50 “illegal immigrants” from his state to the leftist enclave of Martha’s Vineyard, Massachusetts has seen many upset lefties on the island hideaway suddenly singing from the same hymnal book as Southern border conservatives (the claim that they can’t handle the influx, they don’t have the “infrastructure” and “resources” to take in the homeless migrants). But, as part of the rabid reaction, and even while trying to appear “caring” and “compassionate," leftist NBC News featured a guest who likened immigrants to “trash.”

And the net promoted his statement in a tweet, as well.

On September 16, NBC News posted some of its “journalism” about the DeSantis move, including a quote attributed to a man named Max Lefeld:

“’It’s like me taking my trash out and just driving to different areas where I live and just throwing my trash there,’ said Lefeld, a Venezuelan American who's a founding member of the Casa Venezuela Dallas foundation, which helps recent refugees.”

Probably a poor choice of words, and they didn’t go unnoticed. NBC later deleted their tweet, which included the quote - but not before triggering an avalanche of criticism. 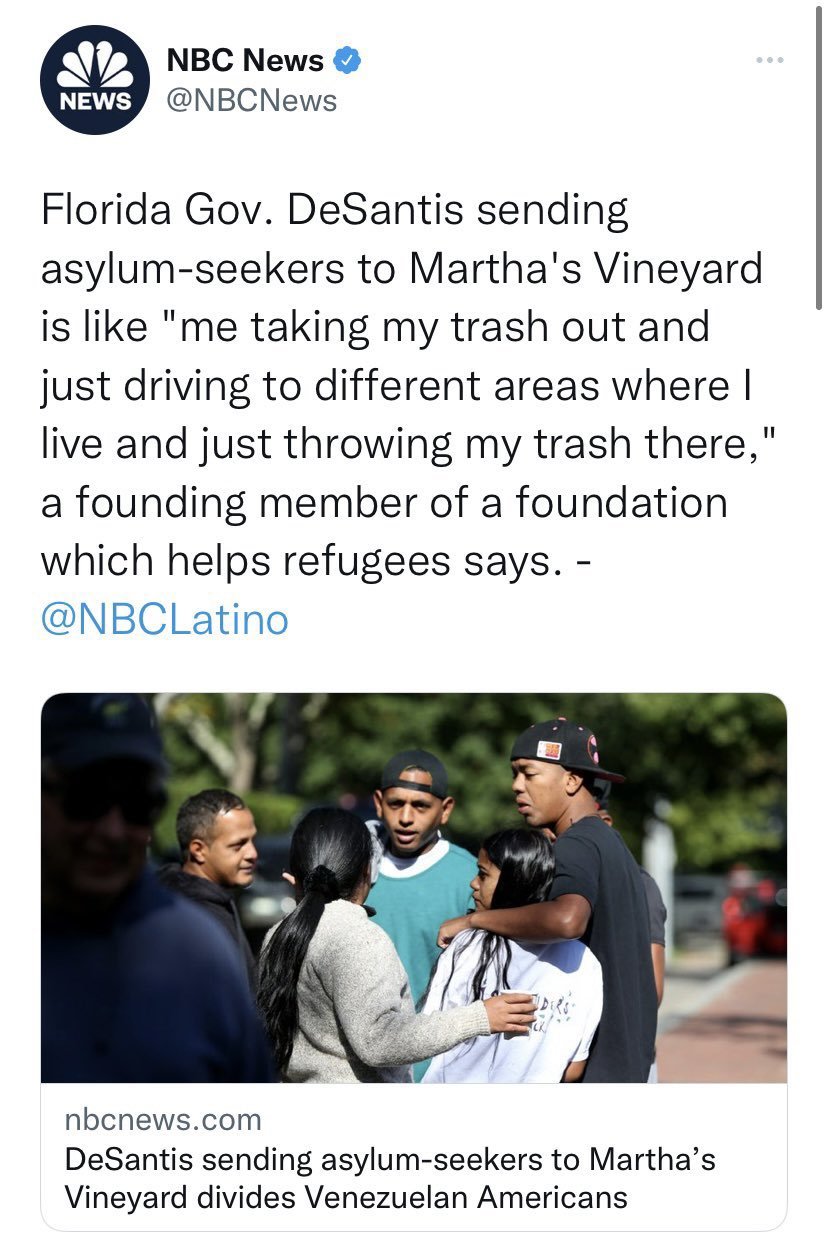 Among many salient points she made, The Daily Caller’s Lauren Duggan observed:

"The comments come amid a broader media blowback against DeSantis’ relocation of the migrants: the 50 individuals who arrived at Martha’s Vineyard triggered numerous negative articles portraying the situation as a humanitarian crisis. Meanwhile, more than 500 migrants illegally crossing the border into Del Rio, Texas (a town of comparable size), has drawn little media attention.”

The plaintive wailing from lefties rings particularly hollow coming from residents of Martha’s Vineyard, one of the wealthiest locales in the U.S. In fact, the “compassionate” Obamas easily could fit all 50 immigrants in their beachside, climate change-denying estate and still host a party where lots of jabbed political pals could contract COVID19, as they did a few months ago.

And, of course, Del Rio, Texas, isn’t the only locale where locals are having a hard time handling the migrant crisis, which some claim was worsened by Biden saying in the first 2019 Democrat Party Primary debate that, if he got elected, migrants should “surge” to the border, and made more confusing by the strange lack of info on who funded various South American and Central American migrant caravans over the past few years.

But all of those issues are cases of “more smoke than fire."

It seems clear that Democrat politicians care not a whit about the welfare of immigrants. They appear to favor a federal policy of open borders as a way to expand the potential number of pro-Democrat voters and to demonize as “racist” Republicans who disagree. The vast, vast majority of Republicans are not racist, but rather fear that too many migrants may depend too heavily on tax-funded welfare systems while taking jobs from U.S. citizens.

The words “immigration” and “immigrant” aren’t in the Constitution. In fact, the only passage of the Constitution from which one might infer a link to immigration is in Article One, Section Nine, focuses on slavery in the original 13 states, and reads, in part:

“The Migration of Importation of such Persons as any of the States now existing shall think proper to admit, shall not be prohibited by the Congress prior to the Year one-thousand-eight-hundred-and-eight…”

Even Texas’s state constitution, approved in 1869, included an article establishing a “Bureau of Immigration” in it. If the people of Texas believed Congress had the power to control immigration, why would they bother creating their own Bureau of Immigration?

Under the Constitution's original interpretation, DeSantis is actually acting within his constitutional purview to do what he did, just as the Governor of Massachusetts (currently Republican Charlie Baker) could take his own action regarding undocumented migrants.

The question is, will people take this debate as an impetus to learn what the Constitution says, and study the way it has been subverted? Or will they continue to focus on labels and bickering?

Either way, the hypocrisy is clear: if one is to criticize supposedly "racist" and "bigoted" right-leaners for their pro-border security stance on illegal immigration, perhaps comparing border crossers to "trash" isn't the best way to do it.