PETA Says You Shouldn't Refer to Your Pet as a 'Pet': 'This Implies That Animals Are a Possession'

Just when you think people couldn’t possibly get any dumber, PETA is there to say, ‘Hold my beer.’

Senior media officer for the always wacky People for the Ethical Treatment of Animals (PETA), Jennifer White, made an appearance on “Good Morning Britain” on Tuesday and said what is possibly one of the most insanely idiotic things I’ve ever heard.

White told co-hosts Susanna Reid and Piers Morgan that calling your pet a “pet” is derogatory and patronizing to animals.

That is something that happened in 2020.

“A lot of people at home who have dogs or cats will call them pets and refer to themselves as owners and this implies that the animals are a possession, like a car for example,” White said.

So if the pet isn’t a pet and the owner isn’t an owner, does that mean that the two parties have mutually agreed and signed a contract to cohabitate with each other under the condition that the human takes care of every need of the animal?

Apparently, according The Daily Mail, White’s comments came days after PETA President Ingrid Newkirk condemned the word “pet,” saying that “the term suggest animals are merely a ‘commodity’ or ‘decoration.’

According to Google’s dictionary:

Pet: (noun) - a domestic or tamed animal kept for companionship or pleasure.

By the way, who calls their pet — and yes I’m going to call them pets, because that’s what they are and it pisses PETA off, so there’s that — but, who considers their pet as “decoration?” I mean, unless you’re a wealthy socialite who never had to work a day in their life, who says that…ever?

“When you refer to animals, not as the living beings as they are but as an inanimate object, it can reflect our treatment on these animals,” White also said.

I’m not sure White understands what the word “inanimate” means. People can clearly see their pets moving, so by asserting that calling your pet a “pet” is equivalent to treating it as an inanimate object just shows the intellectual level we’re dealing with. These are the same kind of people who will chastise you for calling deadly MS-13 gang members "animals."

Piers Morgan took to Twitter to troll the whole segment and PETA: 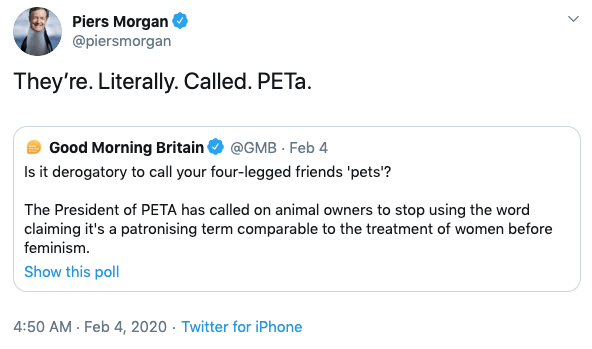 I agree with Morgan. He was obviously reaching to make a joke. But, say stupid things and you deserve a stupid response.

For the full "Good Morning Britain" segment, watch below: